Hridayam: From Adhipan to Chithram, 7 Mohanlal Movies We Were Reminded of While Watching Son Pranav Mohanlal in Vineeth Sreenivasan’s Film (SPOILER ALERT)

Hridayam, also starring Darshana Rajendran and Kalyani Priyadarshan, has been turning into a huge hit at the Kerala box office, despite Sunday lockdowns. As per reports it has got the third biggest opening weekend after Marakkar (also starring Pranav) and Kurup. 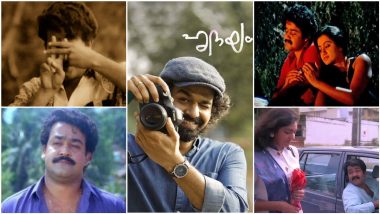 Mohanlal Movies That We Were Reminded of While Watching Pranav Mohanlal's Hridayam! (Photo Credit: Twitter)

Hridayam is a coming of age love story written and directed by Vineeth Sreenivasan, and starring Pranav Mohanlal, Darshana Rajendran and Kalyani Priyadarshan in the lead. The movie is turning out to be a big hit in Kerala, with fans loving the chemistry between the leads, Pranav's improved acting, the heartfelt feel-good moments and of course, the songs composed by Hesham Abdul Wahab. The film's length and the lack of an proper storyline have been criticised, though. Hridayam Movie Review: Pranav Mohanlal Is Charming, Kalyani Priyadarshan Is Bubbly but Vineeth Sreenivasan’s Sappy Film Needed More ‘Darshana’!

Hridayam follows Arun, the character played by Pranav, and is divided into two parts. First half is about the time he does during his engineering course in Chennai, how he meets his friends, most of them for life, and how he falls for the plucky Darshana (Darshana Rajendran), only for things to sour for them enough to break up.

The second half is set two years after he passes out from the college and is  pursuing his real calling in photography. In this phase, he meets the bubbly Nithya (Kalyani) and falls in love for the second time, while still being friends with Darshana. How these love stories, as well the people who come in his life, change him as a person is what the movie is about.

Like I said before, Hridayam has plenty of fan-pleasing moments, and certain small callbacks to past movies, without making it too obvious (save for one). You can feel traces of 96, Premam, and few other movies as inspirations. And maybe it is Pranav in the lead, but I was also reminded of some movies of his father, the superstar Mohanlal, while watching Hridayam. Like the seven below... Needless to say, some SPOILERS ahead!

Let's start with the one the movie itself was vocal about. Arun's surname is Neelakandhan, and Lalettan fans would have picked that up as a callback to his famous character Mangalassery Neelakandan in IV Sasi's Devasuram. Aju Varghese's character even jokes about this to Arun, in case the callback flew over your heads. Interestingly, Mangalassery Neelakandan is a character who is arrogant and high on his feudal power, lost in bad company, before he sees a change in heart after having a moment of truth about himself.

Watch a scene below:

In 1987, Mohanlal played the main lead in the late Venu Nagavally's campus drama, Sarvakalasala, that explored the going-ons of a university from the POV of its senior-most student. Like with Hridayam, Sarvakalasala didn't bother itself with having a major plotline, instead it memorably spends itself in some heartfelt moments, college humour and poignant character interactions. In Sarvakalashala, Mohanlal's character also loses a dear friend in an accident, just like Hridayam's Arun does in Selva. From Mohanlal’s Sarvakalasala to Nivin Pauly’s Action Hero Biju – 7 Malayalam Movies That Ditched Story Structure and Yet Turned Out to Be Awesome.

Watch a scene below:

In Hridayam, Arun tells his friend that stalking a girl to show your 'love' is uncool, and it is better to straightaway tell her what your feelings are for her. These days, some of Mohanlal's past films have been accused of promoting stalking in how the hero woos the girl he likes, like Vandanam for example. The reason for choosing Adhipan here is for two reasons. First, like how Arun falls for Darshana for the first time after hearing her sing in Hridayam, here also Mohanlal's character takes a liking for Parvathy's character after hearing her sing. Second, In Adhipan, Mohanlal tries to get close to her by following her and talk falsities to impress her and fails at that. She is only impressed when he is upfront about his feelings for her in the now iconic roadside scene, watch it below.

The beautiful reworking of the Carnatic keerthanam "Nagumo" is one of the best tracks in Hridayam. Mohanlal's fans would know that this keerthanam was also part of Priyadarshan's Chithram. Let's also remind you here that Chithram also starred Sreenivasan and Lizzy. So Hridayam is like a second-generation reunion with Mohanlal's son and Priyadarshan and Lizzy's daughter) being directed by Sreenivasan's son. Another reminder - Mohanlal's character was a photographer in the movie, who had two women in his life!

Watch the "Nagumo" track in Chithram:

In one of the movie's darker moments when Arun is a detestable bully, he trespasses a junior's birthday bash and begins to punch him for breaking his 'rules'. But before things could get worse, one of the juniors pushes him away and tells him that the birthday boy suffers from pancreatitis. I was reminded of a fairly similar scene in Hariharan's social drama Amrutham Gamaya, where Mohanlal played a guilt stricken doctor who in his college days had killed a student, a heart patient, while ragging without knowing the seriousness of his condition. Thankfully, Hridayam doesn't go that dark, and Arun's victimised junior actually has his own happy ending in the film. Couple other Mohanlal movies that dealt with the subject of ragging were Sooryagayathri and Cheppu.

Watch the Ragging scene from Amrutham Gamaya below:

In the first half, during Arun's rebel streak days, he and his other Mallu friends walk out of the hostel and rent a flat, where they are completely on a party streak, drinking, smoking, and bringing girls to the flat. This reminded me of Pinnilavu, where Mammootty's lead character lives with his irresponsible friends in a house, and becomes like them before he has a change of heart. His friends were played by Mohanlal, Mukesh, Vijayaraghavan (who plays Arun's father in Hridayam) and Santosh. Watch a song from the film below:

Finally, let's talk about a film whose effect on Hridayam cannot be missed. Thoovanathumbikal is about a brash young man who falls for a woman who leaves him one day, and then he is in a relationship with another girl, before the earlier woman wishes to reconnect with him. The beachside conversation between Arun and Darshana in the third act is an interesting gender-reversal spin on the climax of the Padmarajan film, where Mohanlal's Jayakrishnan goes to meet his old flame in Sumalatha's Clara. The spins don't end here.

If in Thoovanathumbikal, when a committed Jayakrishnan meets Clara in the climax, she is already married with a baby. In Hridayam, it is Arun who is married with a baby when Darshana, already engaged, meets him in the third act. In Thoovanathumbikal, Clara and Jayakrishnan have a heart-to-heart talk at the beach before she walks out on him. They rendezvous scenes later in a hilltop and in the final act, they meet at the railway station allowing Jayakrishnan to move on from her. In Hridayam, Arun and Darshana separate at the railway station at the interval, meet physically at her sister's marriage that happens on a hilltop and then their moving-on conversation happens at the beachside. We saw what you did there, dear Vineeth!

(The above story first appeared on LatestLY on Jan 24, 2022 04:28 PM IST. For more news and updates on politics, world, sports, entertainment and lifestyle, log on to our website latestly.com).