Hridayam is a Malayalam coming of age drama that is written and directed by Vineeth Sreenivasan. The movie stars Pranav Mohanlal, Kalyani Priyadarshan, and Darshana Rajendran in the lead. 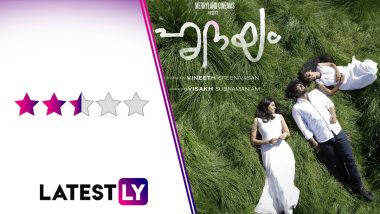 Hridayam Movie Review: Just when you thought Malayalam Cinema might have been tired milking nostalgia, here comes Vineeth Sreenivasan with his Hridayam. Like the name suggests, this coming-of-age is full of heart, very very earnest and also very very long! Starring Pranav Mohanlal, Darshana Rajendran and Kalyani Priyadarshan in the lead, Hridayam is Vineeth Sreenivasan completely in his elements, a director who know what works well with the audience and serves exactly that for them. Vineeth Sreenivasan the writer, though, is on an over-indulgent form here, serving a wafer-thin screenplay that has very little to say. Hridayam Song Kural Kekkutha: Fourth Single From Pranav Mohanlal’s Film Takes Us on a Trip to Chennai.

Hridayam is about Arun Neelakandan (Pranav Mohanlal) and his life-journey that begins with his engineering college in Chennai. It is about him meeting his new friends there and carve some friendships for life, getting in tiffs with his ragging seniors, and of course, falling for the feisty Darshana (Darshana Rajendran). However, the moment their love story is ready to soar, a development happens that crashes the romance.

I won't expand much on the storyline, because frankly if I add anything else, I would be done with the whole plot here. Hridayam is about placing the right moments than serving a story, and there is plenty of that in the movie. I really loved the first act that sets up Arun's college life and his meeting with Darshana, a character whom you fall in love at the first sight just like Arun. I loved that 'mass' scene where Arun rebels against his seniors' dress code of conduct, and later Darshana having her own mass moment against them. The hostel scenes had some funny bits, some reminiscent of Adi Kapyare Kootamani that starred Vineeth's younger brother Dhyan. The "Darshana" song is an absolute beauty. The chemistry between Pranav and Darshana is also an absolute beauty.

It is too bad that movie doesn't allow time for us to relish it, as Vineeth drops a spanner in their romance, but I didn't mind. I felt the film was getting better when the proceedings got darker from hereon, with Arun losing himself with the turn of events. That's it though. It felt that once the movie is done with Arun going all Arjun Reddy, it doesn't really have anything more interesting to say plotwise. Moment-wise, though, it has a plenty to give in!

Hridayam is actually a montage of some very audience pleasing moments with no real stakes, as Arun goes into the depths of his darkness, has a sudden realisation of what he is doing and then picks himself up to be a better student and friend. In between, Vineeth throws in a subplot about a do-gooder Tamil student Selva and his heartwarming efforts to educate the underprivileged engineering aspirants in his locality. Then some more things happen and then we reach the interval point at about 90-minute mark.

If you expect the second half, that is set two years after the interval point, to finally drop some semblance of a storyline, well, you are in for the wrong movie. Again, Vineeth serves more cutesy moments this time Arun with Nithya (Kalyani Priyadarshan), a girl he meets during a wedding. There is also the regular Vineeth Sreenivasan collaborator - Aju Varghese playing a wedding photographer who becomes friends with Arun. Then the film moves on the same feel-good pleasing direction till the end, with very little complications in between, including Arun tying up loose ends with Darshana.

The happy ending arrives finally, and we go home with Hesham Abdul Wahab's lovely tunes playing in our minds. For me, that's the only thing that stayed with me after the movie was over.

Vineeth is a smart filmmaker who knows his audience really well. You can figure out that the director gets the youth and what appeals to them. Most of the films he directed, and even produced, followed the VS formula of having a blend of humour and drama that touches the heartstrings and are mushy as well. Only Thira was a film that was out of his comfort zone. Even if they may not offer anything new plot-wise I had quite enjoyed his movies, with Jacobinte Swargarajyam being my most favourite.

Hridayam I found to be a weird paradox. It is Vineeth at his mushiest, I can sense him becoming more mature as a director and the wholesome feeling that his films possess is in abundance here. There are some really good scenes that are effective. Like in the first half, when he sees his girlfriend crying on the balcony grieving about her father, he returns to console her, showing how he has matured as a person after treating her like a commodity in the previous scenes.

Also, didn't miss out on certain allusions to yesteryear movies that starred Pranav's megastar father. I loved it when Arun tells his friend that stalking is passe and it is better to tell the girl straight away your feelings. This is a subtle dig at some of the old Malayalam films including Mohanlal's own, including Vandanam. Arun's surname is also a callback to a popular Lalettan character (in case you missed that, Aju Varghese's character drops a not so subtle nod at that). The reworked "Nagumo" track, beautifully sung by Arvind Venugopal, could also be a reference to the keerthanam being used in Mohanlal's classic movie, Chithram. A serious ragging scene felt as a reference to a similar sequence in Amrutham Gamaya, that had a more tragic consequence.  Darshana and Arun's last scene together felt like a tribute to the Padmarajan masterpiece, Thoovanathumbikal. Which of course, starred Mohanlal.

Yet, I found Hridayam to be vacuous, and weakest in Vineeth's directorial career in terms of storytelling. The nearly three hour runtime doesn't help matter, as I was hoping the film to let go off its leisurely pace and get done with it, especially the weak second half. But Vineeth keeps dropping in more and more moments, that he knows will be lapped by the audience. From the frequent mention of parotta-beef to making intimate wedding photography a central theme in the second half (why didn't the first half show any hint of Arun's photography love?), Vineeth knows the pulse of his fan-base, and what is the latest flavour with the audience. Hridayam Song Onakka Munthiri: Love Track From Pranav Mohanlal, Kalyani Priyadarshan and Darshana Rajendran’s Film Is Soothing and Beautiful!

When I looked beyond those crowd-pleasers, I was very much disappointed that Hridayam has nothing more to offer that those 'hey I could relate to that' bits.

In the past, that we had have films that also served nostalgia and feel-good moments but also had a story to tell. Case in point, Autograph, Classmates, Premam, and Anandam (which is a VS production BTW). It doesn't really help when the final scene recalls to the Tamil film 96 that handled the theme of lost love in a much more heart-tugging manner.  Maybe I should be an engineering student to enjoy Hridayam better. Just like how IITians swear by TVF's Kota Factory.

For me, Hridayam worked the best when the scenes involved Darshana, in which I am referring both the character and actor. Darshana's troubled state of mind when she learns about the new development in her ex-flame's life is interesting to watch, and the actress acts the hell out of those scenes. In fact, even with her comparatively limited screen-time Darshan out-acts both her other main co-stars. Just wished Hridayam showed more hridayam towards increasing her role.

Vineeth's mettle as a director also is evident in how he uses Pranav the actor. Mohanlal's son is a good-looking fellow, but is a raw actor. In Hridayam, Vineeth allows him to play around in his comfort zone, even when the movie has to show the character in the darkest portions. While there are certain occasions where you can sense stiffness in his act, Pranav is otherwise effervescent and charming enough to make us care for his character. Kalyani's bubbly act is likeable, even though it is not a performance-oriented one.

Hridayam has a really good roster of some talented newcomers in the roles of Arun's friends and classmates. The pick of the lot are Aswath Lal as Antony, and the Tamil actor who plays Selva, apologies didn't catch his name.

- Second Half is Weaker than First

If you are okay with lapping up nostalgia and thennu-soaked sequences and don't mind a discerning lack of a plot, then you will enjoy Hridayam. Otherwise, Vineeth Sreenivasan's latest is a sappy smorgasboard of cholesterol-laden moments, that you might relish in await of a strong plot element to arrive as the main course, but it never does. Never.

(The above story first appeared on LatestLY on Jan 22, 2022 02:09 AM IST. For more news and updates on politics, world, sports, entertainment and lifestyle, log on to our website latestly.com).