After getting almost shelved, looks like Indian 2 is now on track and we even have an update about the cast of the film. Apart from Kamal Haasan and Siddharth, actresses Rakul Preet Singh and Kajal Agarwal too have now come on board for the film. We hear, Rakul Preet will be playing Sidharth's love interest in the film. Read more deets about Indian 2 inside. 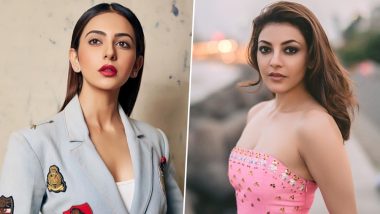 After a reported fallout between Lyca productions and director Shankar Shanmugham, it looks like all's well and the filming of Indian 2 is all set to begin soon. While the film was earlier almost on the verge of getting shelved, we now hear Indian 2 will be going on the floors soon. Director Shankar and Kamal Haasan are all set to team up after nearly two decades and as per reports, the shooting of the film is all set to begin from August 19. While there have been several speculations about Rakul Preet Singh replacing Kajal Agarwal in the film, we finally have some news about the final cast of the film. While we knew that Kamal Haasan will be starring in the film along with Siddharth, there was no clarity over the female leads.  Indian 2 First Look: Kamal Haasan’s Senapathy Is Back With His Paralysing Two-Finger Trick!

Now, we hear, both Rakul Preet Singh and Kajal Agarwal will be a part of the film. We earlier had confirmation about Priya Bhavani Shankar and Aishwarya Rajesh who will be playing key roles in the film. Buzz is that Rakul Preet will be playing the love interest of Siddharth's character, who is a grandson of the vigilante Senapathi and son of Chandru, both roles played by Kamal Haasan in the original film. A confirmation on Bollywood actor Vidyut Jamwal's casting as the lead antagonist in the film is yet to come. In case Jamwal does comes on board, it looks like Indian 2 will pack a punch for sure with this stellar cast.

Check out Ramesh Bala's tweet announcing the cast of the film:

The film is a sequel to the 1996 film. Indian 2 will be releasing in Tamil, Telugu and Hindi. While Kajal Aggarwal will be paired opposite Kamal Haasan, Nedumudi Venu and Delhi Ganesh will be seen in supporting roles in the film. The film is a big-budget venture with cinematographer Ravi Varman and editor Sreekar Prasad on board. The music of the film will be composed by Anirudh Ravichander. Vidyut Jammwal Joins Kamal Haasan's Indian 2?

Earlier, there have been reports suggesting that Indian 2 could be Kamal Haasan's last film. The actor had previously hinted that he may soon wind up his career in films and concentrate on politics. Haasan's first look from the sequel was released earlier this year on the occasion of Pongal.

(The above story first appeared on LatestLY on Jul 23, 2019 09:15 AM IST. For more news and updates on politics, world, sports, entertainment and lifestyle, log on to our website latestly.com).