Innocent Birthday: From Ramji Rao Speaking To Manichitrathazhu, A Look At Some Of The Most Hilarious Roles Played By The Veteran Malayalam Actor!

Innocent, who has turned 73 today, is the veteran actor of Malayalam Cinema. He is widely known for essaying comedy roles. Acted in more than 750 films, his unique mannerisms and diction caught Mollywood lovers’ attention. 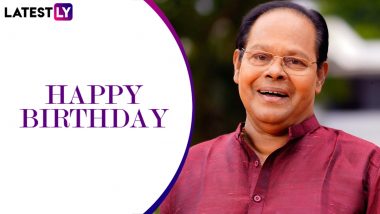 Innocent, who has turned 73 today, is the veteran actor of Malayalam Cinema. He is widely known for essaying comedy roles. Acted in more than 750 films, his unique mannerisms and diction caught Mollywood lovers’ attention. Be it for fans, filmmakers or producers, he is one of the most loved mimicry artistes. Innocent has featured regularly in some of the ace filmmakers movies and they are Priyadarshan, Fazil, Satyan Anthikkad and Kamal. The iconic actor has also been the president of Association of Malayalam Movie Artistes for 12 years. Kilukkam, Urumi, Indian Rupee: Jagathy Sreekumar, the Actor Who Gave Malayalam Cinema Some Unforgettable Moments.

It was in the year 1972 when Innocent had entered the world of cinema. In his career span, he has played a varied range of roles and the audience would always be thankful to him for being such an amazing entertainer. Besides being an ace in doing comedy roles, he has also proven his skills as a serious actor with a touch of laughter and some of such films that he has done include Mithunam, Thuruppugulan, and many others. Also, one also cannot ignore his pairing with KPAC Lalitha. The two have been an iconic onscreen pair of Malayalam Cinema and have done numerous movies together. On the occasion of Innocent’s birthday, let’s take a look at some of his most hilarious roles that he has played over the years and that would be cherished by the audience forever.

Ramji Rao Speaking – This Malayalam film, marking the directorial debut of director duo Siddique and Lal, had went on to become a cult classic. Mannar Mathai, the character portrayed by innocent, is a middle-aged man and owner of Urvasi Theatre. He has no other job and tries to make his living by doing stage shows.

Kilukkam – A musical rom-com directed by Priyadarshan, Innocent as Kittunni works as the help in Justice Pillai’s (Thilakan) house. The scene where he gets fooled by Nandini (Rveathi) about winning a lottery is one of his most memorable scenes from the film.

Godfather – The comedy-drama featured an ensemble cast and Innocent was seen as Swaminathan, second son of Anjooran (NN Pillai). Due to issues from past events, Anjooran develops hatred towards women and his four sons remain unmarried. But Swaminathan leads a secret double life as Ramanathan with wife Kochammini (KPAC Lalitha) and the duo has two kids.

Mithunam – Lineman KT Kurup (Innocent) is the elder brother of Sethumadhavan (Mohanlal). Kurup is seen getting drunk, engaging in arguments and being an irresponsible family man, whereas Sethu is trying his best to solve the problems in his dysfunctional family.

Manichitrathazhu – This psychological horror film directed by Fazil had an unusable theme and it was something that cinema lovers had never seen before. Unnithan (Innocent) and Bhasura (KPAC Lalitha) won hearts with their adorable chemistry as husband and wife duo. The story revolves around the mansion Madampalli and why all the family members fears this mansion. Unnithan is seen as a man portrays to be fearless, but within, he fears even being around that mansion. There are scenes where is seen moving in and around Madampalli in absolute fear and it is his expressions that tickles our funny bones.

(The above story first appeared on LatestLY on Feb 28, 2021 09:03 AM IST. For more news and updates on politics, world, sports, entertainment and lifestyle, log on to our website latestly.com).