Prithviraj Sukumaran, Suraj Venjaramoodu and Mamta Mohandas starrer Jana Gana Mana had released in theatres on April 28. The film is written by Sharis Mohammed and directed by Dijo Jose Antony. 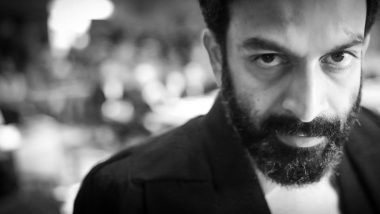 Prithviraj Sukumaran, Suraj Venjaramoodu and Mamta Mohandas starrer Jana Gana Mana had released in theatres on April 28. The film written by Sharis Mohammed and directed by Dijo Jose Antony turned out to be a huge hit. From the narrative, direction, performances by the star, power-packed dialogues to all other technical aspects, Jana Gana Mana received a thumbs up from the audience. The film is now currently being streamed on Netflix in Malayalam, Tamil, Telugu and Kannada languages and Twitterati is going gaga over Prithviraj’s courtroom scene. Jana Gana Mana Movie Review: Prithviraj Sukumaran, Suraj Venjaramoodu's Film Makes All The Right Noises in a Wobbly, Cramped Screenplay.

Prithviraj Sukumaran portrays the role of a lawyer, Aravind Swaminathan. The courtroom scene is getting all the attention for all the right reasons. It showcases the country’s divisive politics and caste crimes. It questions the ‘power of politics’ and all other gruesome incidents that have happened in the country. Prithviraj’s lawyer character’s fiery dialogues have caught movie buffs’ attention and from sharing the video to posting screenshots with the dialogues, Twitterati is lauding for creating such a spine-chilling scene in the Malayalam movie Jana Gana Mana. Take a look at some of the tweets below. Jana Gana Mana Ending Explained: Decoding How Prithviraj Sukumaran-Suraj Venjaramoodu’s Film Will Spill Into a Sequel/Prequel (SPOILER ALERT).

Just imagine the guts of the makers of Jana Gana Mana to do this. Commendable and extremely ballsy to come up with something like this in today's India. https://t.co/qol7OF6TaC

The Epic Dialogue From The Film

#JanaGanaMana is a powerful Movie.

A film that touches the hearts of the people. "Janaganamana" gives a great cinematic experience with the theme of the film, the majestic making and the excellent performances of the actors.

Addresses EVERYTHING that needs attention in this country today and does a SPECTACULAR job at it.

Holding authorities accountable, questioning the system and having the spine to ask for change-this is what patriotism looks like 🇮🇳#JanaGanaMana

'The politics of color' from Malayalam movie #JanaGanaMana pic.twitter.com/scrs2HyGY8

Truth Has Been Presented In Reel

All the nice face of Indian racists, casteist politicians & their supporters are torn apart by the truth in this scene! #JanaGanaMana 👌🏽 https://t.co/zWqf66TUK5

like I said, no one apart from Prithviraj or Malayalam film industry has the courage to touch such topics. A must watch movie. https://t.co/Mbyw2RsQjy

Jana Gana Mana is produced under the banner of Prithviraj Productions and Magic Frames. If you have watched this Malayalam film, share your views in the comments section below.

(The above story first appeared on LatestLY on Jun 10, 2022 04:38 PM IST. For more news and updates on politics, world, sports, entertainment and lifestyle, log on to our website latestly.com).