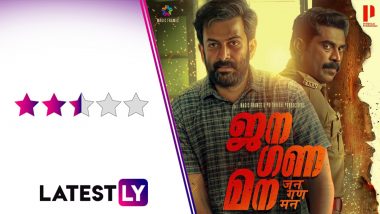 Jana Gana Mana Movie Review: When I look back at Jana Gana Mana, right at the start, I found its disclaimer to be laughable. One of the sentences in the disclaimer read that the movie is not a political commentary on anything. The truth, and an applause-worthy one at that, is that the movie is definitely a political commentary on what's happening around this country. Jana Gana Mana, directed by Dijo Jose Antony, derives inspirations from the ruling sensational headlines and breaking news of the past couple of years, have its characters placed either into bracketed archetypes we associate each of us on social media and then have its lead character drop one after another monologue to question our very attitude to what we want to believe and what not. Jana Gana Mana Movie Review: Twitterati Declare Prithviraj Sukumaran, Suraj Venjaramood’s Malayalam Film A Well-Written Thriller.

All said and done, it is unfortunate that the lofty, stinging and sharp critical digs are trapped into a screenplay that tries to do a lot, does some, and then wobbles around to tie up the rest in a promise of a prequel/sequel that may or may not happen. Jana Gana Mana attempts to be clever, and it does come across so in some occasions, but doesn't pull the trick enough to not make us question the loopholes of the proceedings.

Okay, I should talk about the plot first. Jana Gana Mana is a case of two distinct halves that is shown through the perspective of its two leads, one at each time. Set in a place called Ramanagara (geddit?) where characters converse in Malayalam, Tamil and Kannada as and when required. The charred body of Sabha Maryam (Mamta Mohandas) a female professor in a university is found, and the post-mortem report suggests that she could have been raped before she was killed.

Her death becomes a sensational news on TV and social media, her adoring students revolt against their indifferent university management and after much fracas, ACP Sajjan Kumar (Suraj Venjaramoodu) is brought in to investigate the murder. He gets his hands on four suspects who are criminals, with a witness identifying them, but the increasing pressure from the public and his own department force his hand to do something extra-judicial.

Prithviraj plays a handicapped lawyer called Arvind Swaminathan, who doesn't feature much in the first half, save for the opening scene and the scene just before the interval. However, he completely dominates the second half that turns into a courtroom drama, bar for the extended epilogue.

The basic premise of Jana Gana Mana is inspired by the rape and murder of a doctor in Hyderabad in 2019, and the police encounter that killed the suspects, which was cheered by the news channels and the public on social media, including several celebs. I loved that the movie questioned that mentality to accept things blindly, and cheer for what was a very unlawful incident, without asking for once whether the same treatment would have meted out to suspects who had a better standing in the society. I had questioned some of the cheerleaders then, and Prithvi's lawyer character does here too and I felt mollified. Does killing a suspect without proving his guilt amount to justice? The second half asks this, as well as several other pertinent questions including the role of media.

You can guess that I prefer the second half over the first, my love for courtroom dramas not only playing a bias here (see my review for Naradan), but also for the fact that the first half is very, very shaky. Like I mentioned in the opening para, the screenplay by Sharis Mohammed takes heavy inspirations from major head-turning events that ruled over news channels and social media, and weaves a plotline through them. From the aforementioned violent incident to the encounter killing to even police brutalities meted out to students in DU and JNU universities, the inspirations are quite heavy and loom over the screenplay distractingly at that. It helps less when none of the supporting characters make for memorable impressions, but mere cardboard cliches and caricatures. Like Vincy Aloshious's Gauri, a student leader, whose character gets prominence but never fleshed out. There is also that VC of the university, who is made up suspiciously like a very popular politician, and who gives hard stares and even awkwardly insults the dead victim at her own wake (while borrowing his real-life inspiration's infamous line of identifying the mischief-mongers by their clothes). But the character doesn't matter much apart from being pointed dig.

Even the investigative process by the ACP feels weak and rushed at the same time. It does make sense why the movie makes it so by the end, but that doesn't acquit Jana Gana Mana of making it feel so slumbersome and callous. However, the one big positive is Suraj's fabulous performance here. Jana Gana Mana Movie Review: Prithviraj Sukumaran And Suraj Venjaramoodu’s Malayalam Film Is An Engaging Political Thriller, Say Critics.

I am not sure if it was deliberate, but what I wanted to see the first half of Jana Gana Mana as a metaphor of the very deceptive perception that Arvind tries to expose in the second half, though he is referring to the media and the system there. It is a trick that Drishyam 2 also pulled off, albeit in a much more polished manner. But I assure that at least some of the loopholes of the first half will make sense by the end of the movie.

Okay, enough about the first half. The second half is where Jana Gana Mana truly shines in its own wary, and along with it, Prithviraj delivers a cracker of a performance with dialogues and monologues that would cheer up the liberals in the audience. If you are not one, kindly avoid this one, because there is nothing for you to cheer on. The statements that the movie makes may validate those who have similar thoughts and sentiments, but I am not very sure it might transform others, who might sideswipe the film as a 'commi' or a 'suddapi' propaganda. Already I can see those allegations on social media.

It is not just the lofty monologues that lift the film, but also how it turns the narrative. While I always suspected about the motives behind Sabha's killing, still Jana Gana Mana dropped a couple of major surprises through what is intentional tricking. I only wish that these surprises are dropped in a more intelligent manner, say like in The Usual Suspects, or even in the Drishyam films. I also wished the courtroom drama was not merely for Arvind to present his statements and arguments without proper opposition. Shammi Thilakan plays the state counsel but he gives up halfway after some half-hearted arguments. In these portions, the movie becomes a platform for Prithviraj to dazzle and he does that magnificently. I almost whistled when he made his final argument about democracy.

Real-life inspirations also seep in the second half, as Arvind drags in the Nambi Narayanan controversy, while a key plotpoint is inspired by the Rohith Vemula suicide, not to mention references to mob-lynchings. It helps in the movie making its points about caste oppression and media manipulation, but you can't help but think if it is crushing way too many stuff in here. If that's not irksome enough, the final act of Jana Gana Mana drops in some new twists and turns, and also a KGF-inspired promise of a sequel-prequel that will fruitify if CBI 5, releasing on May 1, doesn't crush Jana Gana Mana in theatres. Also, for the first time in my life, I have seen a movie have its trailers that are actually about the sequel!

- Strong Statements In the Second Half

- An Uneven Screenplay With a Weak First Half

Jana Gana Mana does one thing right, it makes us see light why we should not cheer for something unlawful just because the media portrays it so. It strongly tackles our societal biases in handling a piece of information that comes on our phones, even if it is biased about its own politics. Wish these strong points didn't depend on a feeble and often illogical framework to put the statement across. After all, I have to evaluate Jana Gana Mana as a movie, not as a collage of clips that I could forward to my family WhatsApp groups. But three cheers for the spirit, man!

(The above story first appeared on LatestLY on Apr 29, 2022 01:03 AM IST. For more news and updates on politics, world, sports, entertainment and lifestyle, log on to our website latestly.com).