Jayashree stopped responding to messages and phone calls from family and friends. It was then that they tried contacting the Ashram to find out what is happening. 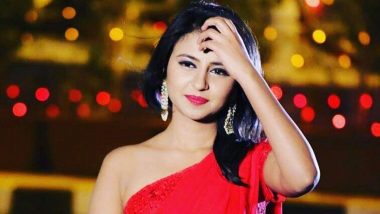 Former Bigg Boss contestant Jayashree Ramiah, who was battling with depression for a long time now, passed away on Monday. The actress was found hanging in Sandhya Kirana Ashram of Bengaluru where she was getting treatment. Reports suggest that after her stint in Bigg Boss Kannada season 3, she did not get a lot of work opportunities and this had been bothering her a lot. Former Bigg Boss Kannada Contestant Jayashree Ramaiah Deletes Post Saying 'Goodbye to This World and Depression', Clarifies She's Alright and Safe.

One of Jayashree's close friends Shilpa had been in contact with the actress even when she decided to push away all her friends and family back in July 2020. She informed a local news channel that on Monday Jayashree stopped responding to messages and phone calls from family and friends. It was then that they tried contacting the Ashram to find out what is happening. When the authorities of the Ashram checked in on her, they found her hanging. A case has been registered with Madanayakanahalli police station of Bengaluru. More details of the case are expected to come soon.

Earlier on June 24, 2020, Jayashree sent her fans into a shock when she wrote a cryptic message on her Facebook account. "I quit. Goodbye to this f*****g world and depression," said the actress in her post.  Several fans and friends of the Bigg Boss contestant reached out to her asking if she's fine and Sudeep Kiccha reportedly even talked to her and made her feel better. She then had taken down her earlier post and wrote, "I'm Alright and safe!! Love you all." VJ Chitra, Popular Actress And Anchor, Dies By Suicide.

Adhiviti Shetty had spoken to a portal talking about being aware of Jayashree's depression. "Jayashree has been battling depression for a while now. She had family issues and was also concerned about the lack of work," revealed Shetty. Jayashree had made her acting debut with Imran Sardhariya's Uppu Huli Khara.

(The above story first appeared on LatestLY on Jan 25, 2021 04:32 PM IST. For more news and updates on politics, world, sports, entertainment and lifestyle, log on to our website latestly.com).