VJ Chitra, the young television actress, who is also known for hosting shows, has reportedly died by suicide. According to media reports, Chitra was found dead at a hotel room in Nazarathpet, Chennai. 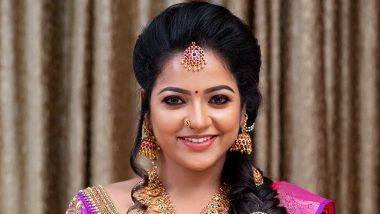 VJ Chitra was one of the finest talents in the Tamil television industry. The young TV actress, also known for hosting shows, has reportedly died by suicide. According to media reports, Chitra was found dead at a hotel room in Nazarathpet, Chennai, on December 9. This is one of the shocking incidents coming across for all colleagues and fans of Chitra. Bigg Boss Tamil 3 Contestant Losliya Mariyanesan’s Father Dies Of Heart Attack.

VJ Chitra, aged 28, had checked into her room at around 1am on December 9 after completing a shoot at EVP Film City. A police official from Nazarathpet station revealed to TNM, “The hotel manager called the police helpline number 100 about 3.30am on Wednesday. We are currently investigating the cause of her death.” The family of the actress has not shared any official statement yet. Abhishek Makwana, Taarak Mehta Ka Ooltah Chashmah Writer, Dies By Suicide.

VJ Chitra was quite well known amongst the audience in Kollywood. She was widely known for essaying the character Mullai Kathiravan aka Mulla on Pandian Stores that has crossed over 500 episodes. She was even known for playing roles in serials such as Chinna Papa Periya Papa, Saravanan Meenatchi, Darling Darling, Velunachi, among others. We express our heartfelt condolences to the family members and all loved ones.

(The above story first appeared on LatestLY on Dec 09, 2020 09:38 AM IST. For more news and updates on politics, world, sports, entertainment and lifestyle, log on to our website latestly.com).