Karnan starring Dhanush is getting rave reviews from critics who just can't get over how Mari Selvaraj has neatly put together the rampant caste system by talking about the oppressors and the oppressed. Dhanush's performance has left them equally awe-struck 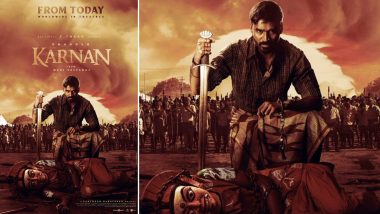 Karnan released today with limited occupancies at the theatres. The reviews have started to come in and the critics seem bowled over by the two most important aspects of the film - Dhanush's performance and Mari Selvaraj's direction. Karnan is a story about two villages and their rivalry. It is also a tale of rising up against oppression. Critics are praising the way the director has sensitively treated the menace of the caste system in the film without being preachy or demeaning towards anybody. No wonder the director is getting so much love from the audience as well. Dhanush On Karnan’s Theatrical Release: Actor Thanks Producer Kalaippuli S Thanu For Thinking About Theatre Owners, Distributors And Exhibitors

There are reports that Karnan has already managed to get a good opening despite restrictions. The Tamil Nadu government had recapped the seating capacity at theatres recently due to a surge in COVID-19 cases. Check out all the reactions from the critics. Karnan First Look: Dhanush’s Film To Release In Theatres On April 9! Actor Is Handcuffed And Wounded In This New Poster

5 stars for #Karnan. The hype is real. Extremely powerful, haunting drama about class divide and fighting for one’s identity. By the end of the film, you’re left shaken from the inside. You’re left speechless. @mari_selvaraj and @Dhanush give us a film to remember for years.

A treat for good cinema lovers

#Karnan A film which will be celebrated by ‘Good Cinema Lovers’ for the awesome performances, Perfect Music and Extraordinary Visuals. Movie begins with perfect setup, one of the best interval scene, very very emotional 2nd half & ends with a perfect climax. #FightForTheIdentity

A classic on its first day of release

#Karnan - 🌟🌟🌟🌟, yet another brilliant film from @mari_selvaraj. @dhanushkraja once again proves that he is a monster performer. Phenomenal work by @Music_Santhosh and #TheniEeshwar. A classic revenge saga that conveys an important message.

Exciting in a lot of parts

#Karnan: The film on the whole is detailed and long drawn out, but keeps giving us exciting stretches that make us root for @dhanushkraja and all the other characters in the village. The start up, interval block and the climax are pitch perfect, to say the least!

Guts and deftness together

What happens when a gutsy director @mari_selvaraj and an awesome actor @dhanushkraja come together? #karnan is another film which Tamil cinema can be proud of 👍 @theVcreations pic.twitter.com/5TLOh99Gh8

A symbol of great cinema

How those who are oppressed for centuries demand dignity, the system tries to put them in place..

There were scares that Karnan might have to take the OTT route to release because of the restrictions and COVID-19 cases. When the release date got confirmed, Dhanush welcomed the news calling it a big relief for many.

(The above story first appeared on LatestLY on Apr 09, 2021 03:32 PM IST. For more news and updates on politics, world, sports, entertainment and lifestyle, log on to our website latestly.com).