The makers of Dhanush starrer Karnan confirmed on January 31 that the rural drama would hit theatres in April 2021 and the actor has thanked Kalaippuli S Thanu for the same. 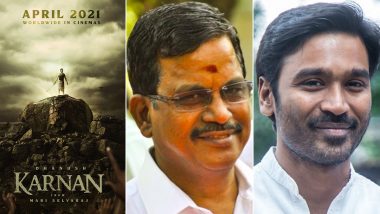 The makers of Dhanush starrer Karnan confirmed on January 31 that the rural drama would hit theatres in April 2021. This has indeed become a huge sigh of relief for ‘theatre owners, distributors and exhibitors’ for which Dhanush has thanked film’s producer Kalaippuli S Thanu. There were several films that had to be released on OTT platforms as the theatres were closed down from March 2020 in the wake of coronavirus outbreak. It was in October 2020 when theatres reopened with 50% occupancy and yesterday I&B Ministry confirmed that the theatres, cinema halls and multiplexes in the country can run with 100% occupancy by adhering to the new SOPs issued in order to contain the spread of COVID-19. Karnan Release Date Announced! Dhanush Set To Conquer Theatres From April 2021 (Watch Video).

With the Centre announcing about theatres permitted to run with 100% occupancy and makers of Karnan announcing that the film will have a theatrical release, it has turned out to be a bonanza not just for the movie buffs but also for film exhibitors and many others. Dhanush issued a statement on the theatrical release of Karnan that read, “Karnan releases April 2021 in theatres. A much needed encouraging news at the right time. Thank you Thanu Sir for thinking of the theatre owners, distributors, exhibitors and everybody who’s livelihood is dependant on films and theatres, even though you had other options. A big thank you on behalf of my fans as this means a lot to them.” I&B Ministry Permits 100% Occupancy in Theatres and Cinema Halls From February 1, Issues New SOPs To Contain Spread Of COVID-19.

Besides Karnan, the other Tamil film that Dhanush has in his kitty is Jagame Thandhiram. Rumours are doing rounds citing that the makers are eyeing to release the film on Netflix in March. However, there has been no official announcement on it yet.

(The above story first appeared on LatestLY on Jan 31, 2021 01:08 PM IST. For more news and updates on politics, world, sports, entertainment and lifestyle, log on to our website latestly.com).