Karnan First Look: Dhanush’s Film To Release In Theatres On April 9! Actor Is Handcuffed And Wounded In This New Poster

On February 14, Karnan makers have not only announced exact theatrical release date, but even shared the first look of the film. Directed by Mari Selvaraj, the Dhanush starrer is all set to hit the big screens on April 09, 2021. 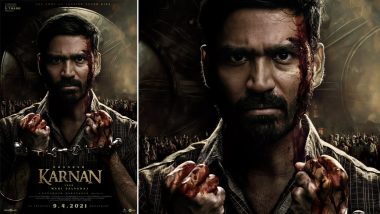 On January 31, the makers of Karnan had confirmed that the Dhanush starrer will be releasing in theatres worldwide in April 2021. However, the exact release date of the film wasn’t mentioned. On February 14, the makers have not only announced exact theatrical release date, but even shared the first look of Karnan. Directed by Mari Selvaraj, the film is all set to hit the big screens on April 09, 2021. Karnan Release Date Announced! Dhanush Set To Conquer Theatres From April 2021 (Watch Video).

The brand new poster of Karnan features superstar Dhanush in an intense avatar. He is seen handcuffed and wounded. The top right of his forehead is seen bleeding and so does his fists. There is anger in eyes, but so is pain. The backdrop of the poster also highlights many villagers. While sharing this first look, the makers of Karnan wrote, “The Soul of Justice never dies”. Dhanush On Karnan's Theatrical Release: Actor Thanks Producer Kalaippuli S Thanu For Thinking About Theatre Owners, Distributors And Exhibitors.

Dhanush had earlier thanked the film’s producer Kalaippuli S Thanu for not skipping the theatrical release of Karnan. He had written, “Thank you Thanu Sir for thinking of the theatre owners, distributors, exhibitors and everybody whose livelihood is dependent on films and theatres, even though you had other options. A big thank you on behalf of my fans as this means a lot to them.” The upcoming Tamil is produced under the banner of V Creations.

(The above story first appeared on LatestLY on Feb 14, 2021 11:40 AM IST. For more news and updates on politics, world, sports, entertainment and lifestyle, log on to our website latestly.com).