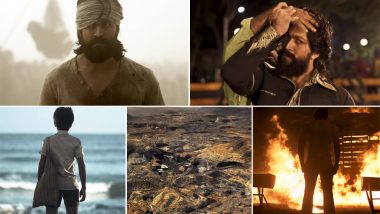 Yash and Srinidhi Shetty starrer KGF Chapter 1 seems to have impressed the audience big time. After releasing on December 21 and getting off to a decent start at the box office, the Hindi version of the film enjoyed a good run at the ticket windows over its first weekend. Backed by Farhan Akhtar's production company Excel Entertainment, on Day 3 the big-budget action drama raked in Rs 4.10 crore, bringing its total three-day collection to Rs 9.20 crore for the Hindi version. Now that's mighty impressive because KGF, which is a two-part series, wasn't a solo release but that sure hasn't affected its performance at the BO. KGF Box Office Collection Day 2: The Hindi Version of Yash Starrer Witnesses a Slight Growth, Collects Rs 5.10 Crore.

Apart from KGF, Shah Rukh Khan's highly anticipated film Zero also hit the theatres on December 21 but sadly the film opened to mostly negative reviews from the critics. As a result, the film didn't do well as expected in the first two days at the domestic box office. On the other hand, the Hindi version of Yash starrer has gained momentum at the ticket windows and looks like the film will end with up good lifetime figures. KGF Chapter I Movie Review: Yash Stands Tall in This Needlessly Stretched Violent Saga.

KGF, which has been dubbed in Hindi, Tamil, Telugu, and Malayalam, is also doing well in the USA. South industry trade expert Ramesh Bala tweeted a while back, '#KGF has crossed $300K at the #USA Box Office..Fastest Kannada Movie to do so.' That's not all. He also revealed on Twitter that screens have doubled in Tamil Nadu after Yash's film witnessed super positive response. Guess its safe to say that the Yash starrer is heading in the right direction at the box office all over India.

(The above story first appeared on LatestLY on Dec 24, 2018 11:28 AM IST. For more news and updates on politics, world, sports, entertainment and lifestyle, log on to our website latestly.com).