Sanjay Dutt As Adheera in KGF Chapter 2: Did You Know This Is Not Khalnayak Star’s First South Film? Watch VIdeo

On July 29, 2019, Sanjay Dutt celebrates his 60th birthday. On this day, the producers of KGF: Chapter 2 took the opportunity to announce that Sanjay Dutt will be the antagonist in the upcoming sequel. 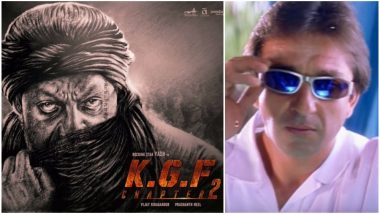 Sanjay Dutt As Adheera in KGF Chapter 2: Did You Know This Is Not Khalnayak Star’s First South Film? (Photo Credits: Twitter)

On July 29, 2019, Sanjay Dutt celebrates his 60th birthday. On this day, the producers of KGF: Chapter 2 took the opportunity to announce that Sanjay Dutt will be the antagonist in the upcoming sequel. While we got confirmation on this day, the rumour has been quite strong that Dutt will be appearing in the sequel. KGF Chapter 1, directed by Prashanth Neel (who is also helming the sequel) came out in December 2017 and was one of the biggest hits in Kannada Cinema. The Hindi dubbed version also was a success at the box office. Yash had played the lead role in the movie. KGF Chapter 2: Sanjay Dutt’s First Look as Menacing ‘Adheera’ Is the Perfect Birthday Treat for His Fans

In the sequel, Sanjay Dutt is Adheera, whose look has been revealed along with the announcement. While Sanjay Dutt has been in the industry for more than four decades, KGF Chapter 2 would be his first full-length mainstream foray into South cinema.

That said, this is not his first appearance in a South film. In the 1998 Telugu film Chandralekha, Sanjay Dut had a cameo appearance. The movie, directed by Krishna Vamsi, was a remake of the Hollywood film, While You Were Sleeping, though it was closer in treatment to the Malayalam remake, also named Chandralekha. KGF Star Yash to Be a Dad Again, Announces Chapter 2 of Fatherhood With Daughter Arya’s Super Cute Video.

Sanjay Dutt had played a man who is not mentally well and brings trouble to the protagonist, played by Akkineni Nagarjuna... for about two minutes.

Check out the cameo below:

Interestingly, Anil Kapoor had donned the same role in the Malayalam remake, that had Mohanlal in the lead and directed by Priyadarshan. The movie was also remade in Hindi with Salman Khan as Har Dil Jo Pyaar Karega, where Shah Rukh Khan had done the cameo appearance.

So it would be definitely interesting to see how Sanjay Dutt makes of his first South role. Whenever Dutt plays a villain a la Khalnayak, Agneepath et al, he is always in scene-stealing form. Expecting the same kind of impact with KGF Chapter 2 as well!

(The above story first appeared on LatestLY on Jul 29, 2019 12:49 PM IST. For more news and updates on politics, world, sports, entertainment and lifestyle, log on to our website latestly.com).