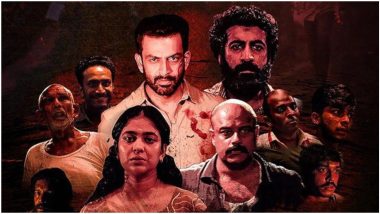 Kuruthi has been getting good response from fans and critics, though our review has been less favourable with regards with its treatment and what it intends to show. Kuruthi is about Ibrahim (Roshan Mathew), a rubber tapper, a widower and a devout Muslim, who is undergoing a crisis of faith. His beliefs are dangerously tested when his house is invaded first by a honest police officer (Murali Gopy) who has with him a young convict Vishnu (Sagar Surya), a hardliner Hindu murder accused. They take refuge at Ibrahim's house after their convoy is ambushed. Ibrahim's old but world-wisely father Moosa (Mamukkoya) and his easily-influenced younger brother Resul (Naslen) are also present in the house.

Soon they are joined by Laiq (Prithviraj Sukumaran), a radical Muslim whose father was the victim of Vishnu's hate crime, and who is out to seek bloody vengeance. Other characters also get involved in the ensuing drama like Suma (Srindaa), Ibrahim's Hindu neighbour who has a soft spot for him, Preman (Manikandan Achari), Suma's good-hearted, drunkard brother, Kareem (Shine Tom Chacko), Ibrahim's friend and Laiq's aide and Ansalan (Navas Vallikunnu), Laiq's helper.

Soon, religious priorities take over common sense and humanity, and Ibrahim sees himself in a moral dilemma over standing by his own folks or protecting the one man who hates his community to the very core. (SPOILERS AHEAD)

During the forest chase and the subsequent ambush, Laiq is about to kill Vishnu, who has been grievously injured, but is stabbed from behind by Ibrahim. A mortally injured Laiq asks Ibrahim how different it is to kill him over Vishnu, when it is all the same, to which there is no reply from his stabber. Later, Ibrahim, carrying his injured father, along with Suma, Preman (who might not survive his snake-bite) and Vishnu are crossing a stream to get to the bridge that takes them to the other side of the town to a hospital. A tired Ibrahim tells Vishnu to run and save his life. Ambling towards the bridge, Vishnu finds an angry Resul waiting for him on the opposite side (how he reached there, I am clueless), with a knife in his hand. The screen cuts to black, leaving both their fates undecided.

What Does it Mean?

The whole film can be seen as the metaphor of what is happening in the WhatsApp groups of our families and friends. Once inter-mingling group of friends of various castes and faiths are now fighting with each other using skewered history, conspiracy theories and flimsy accusations. Ibrahim represents the confused centrist trying to find a place for himself in this fracas, often keep being questioned on not taking side of his 'blood brothers'. Moosa is the sane voice, whose pertinent questions never get answered and whose reasoning gets ignored by people around him. And yet in the film, he is also at fault for inadvertently instigating his younger son by challenging his masculinity. Kuruthi Twitter Review: Netizens Are in Awe of Prithviraj Sukumaran’s Thriller Film on Amazon Prime Video.

In the end, no one is a winner as with any WhatsApp debate, and everyone is left bitter and anguished at each other. As someone who has left many WhatsApp groups seeing my friends and relatives turn unrecognisable in their hatred for their own fellow countrymen, this is one sentiment I could agree.

Kuruthi may want you to believe that the falling on Laiq makes for a happy ending but it isn't true. As Moosa reminds Suma, there is no going back from all the bitterness that had exploded before when they chose their radical thoughts over common sense. The equation between the once-cordial families have been changed forever. The injuries may go away, but the scars are deeply entrenched.

The film presents a bleak sense of hopelessness for the fate of humanity, as it reminds you that we are always meant to be warring with each other. Moosa's parable of how the first sin isn't Adam and Eve eating a forbidden fruit, but of Cain killing his brother Abel over spite and jealousy makes sense here. He believes that we are descendants born out of this hate (and incest?) and therefore that's what we are, looking for a reason to kill fellow people in a never-ending cycle of vengeance and blood-letting.

This lesson is truly represented by Resul, after being instigated by Laiq's dying words, is about to kill Vishnu. Laiq may be no more, but the sense of bloodthirsty anger and vengeance lives on without him. In fact, it was already present even before he attacked Vishnu's police convoy.

One huge issue I had with Kuruthi here, is that the film was not very clear on Ibrahim's state of mind, or his reasoning. We hear everyone around him speak their thoughts - sensible or senseless - but Ibrahim, who is too shrouded in his Islamic teachings, never seems to challenge any one of them. Even Laiq, who keeps accusing Ibrahim that he is going to be punished by Allah by protecting Vishnu. Does Ibrahim believe this murderous stranger who uses his flawed thoughts to instigate others? Does he feel right in killing Laiq to save another murderer? Does he believe Suma's stance that Vishnu was right in killing a man because his faith has been besmirched? Had he saved Vishnu because of his duty towards humanity or because he swore to do so on Quran? We may never know...

(The above story first appeared on LatestLY on Aug 11, 2021 03:13 PM IST. For more news and updates on politics, world, sports, entertainment and lifestyle, log on to our website latestly.com).