The trailer introduced Kajal as the director who is very enthusiastic about making a show about ghosts. She reveals that the show ill be telecasted live for the audience to enjoy. 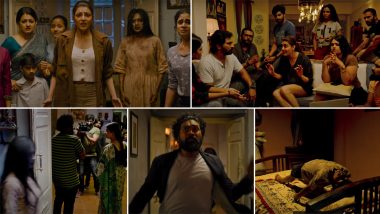 After a dreamy wedding and honeymoon, Kajal Aggarwal is back to work and will be seen in Disney+ Hotstar VIP web show titled Live Telecast. The show is a horror web series where Kajal will be seen as a director of the show. The series follows the story of the members of a TV crew who are adamant on creating a superhit show but things go wrong when they get trapped in a house controlled by supernatural powers. The makers of the series already gave the audience a glimpse of what's to come earlier and now have shared the trailer of the show as well. Live Telecast Teaser: Kajal Aggarwal's Digital Debut for Venkat Prabhu's Web-Series Cannot Get Spookier Than This.

The trailer introduced Kajal as the director who is very enthusiastic about making a show about ghosts. She reveals that the show ill be telecasted live for the audience to enjoy. The team even casts a man who essays the role of a ghost in the live shows to make it look more real and believable for the audience. The shoot begins and runs smoothly until the members of the team start acting strange. Some of them get possessed by the supernatural powers and chaos follows. What happens next is what we will find in the series, till then check out the trailer of Kajal Aggarwal's series here:

Talking about the show, Kajal has earlier said, "My character Jenny, a director by profession, is a strong and independent woman whose single-minded goal is to make a successful TV show and, in that quest, she finds herself locked in a huge house with no way out. Audiences who love horror stories and otherwise are going to love this show." The director of the show, Venkat Prabhu added, "This is my fresh attempt at storytelling for a digital platform, and the entire experience of transforming this film script to series has been a massive journey." Kajal Aggarwal Shares Heartwarming Moments From Her ‘Punjabi Meets Kashmiri Wedding’ With Gautam Kitchlu.

Live Telecast marks Kajal's digital debut and will release on February 12 on Disney+ Hotstar VIP. The seven-episode series also marks the digital debut of Prabhu, who has films such as Chennai 600028, Saroja and Biriyan" to his credit. The show also features actors Vaibhav Reddy, Kayal Anandhi, Priyanka, Selva, Daniel Annie Pope, Subbu Panchu Arunachalam and others in pivotal roles. The Hotstar Special has been produced by V Rajalakshmi.

(The above story first appeared on LatestLY on Jan 29, 2021 06:11 PM IST. For more news and updates on politics, world, sports, entertainment and lifestyle, log on to our website latestly.com).