The teaser looks intense and a little credit of the same goes to the background music score as well. Chaitanya is looking impressive as usual in his innocent sweet boy avatar. 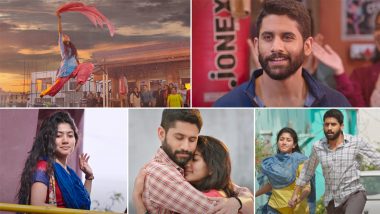 Naga Chaitanya, Sai Pallavi and the makers of their film Love Story have been teasing the fans with different updates about the film. The makers have been sharing snippets, photos of Naga and Sai, increasing the excitement for the film amongst the fans. The team has finally shared the first teaser of Love Story that gives us a sneak peek into the lives of the lead characters of the film. Naga essays the role of a fitness coach while Sai essays the role of an ambitious software engineer and the tease showcases the journey of their bittersweet love story. Love Story Poster: Naga Chaitanya & Sai Pallavi Steal a Glance As They Wish Everyone a Happy Diwali.

The teaser introduces Chaitanya as a hardworking person who trains people in fitness. Pallavi's character has just lost her job and is worried about what will happen to her career. The two connect on these ground as the teaser moves ahead. Their love blooms and the two share some special moments together. The two are seen running away from something as the background music elevates, leaving the fans to wonder what will happen next.

The teaser looks intense and a little credit of the same goes to the background music score as well. Chaitanya is looking impressive as usual in his innocent sweet boy avatar. Sai's presence is also pleasant and her fans will surely be happy to see her in the film. Chaitanya and Pallavi's chemistry is delightful and is surely something to look forward to in the film. The two have learnt Telangana dialect for the film and seeing the teaser, we think they are doing a great job speaking in that dialect.

Talking more about the film, the shoot for the same came to a halt owing to COVID-19 crisis and the consequent lockdown. After six months of no shoot, the team finally kickstarted the work from the first week of September in Hyderabad and in several parts of rural Telangana. The director of the film - Sekhar Kammula along with the producers decided to release the film around New Years celebrations but lead star Naga Chaitanya is in no hurry for the film to release. Love Story: Naga Chaitanya and Sai Pallavi are all Mushy and Romantic in this First Look Poster.

Love Story also marks Sai Pallavi's reunion with Sekhar Kammula after Fidaa while she will be sharing the screen space with Naga Chaitanya for the first time. The film is produced by Sri Narayandas Narang and Sri P Ram Mohan Rao under the banner of Sree Venkateswara Cinemas.

(The above story first appeared on LatestLY on Jan 10, 2021 01:37 PM IST. For more news and updates on politics, world, sports, entertainment and lifestyle, log on to our website latestly.com).