The highly-anticipated film Master, starring Tamil superstars Thalapathy Vijay and Vijay Sethupathi, could well be on its way to create a record at the box office despite opening amid the pandemic and being leaked on torrent websites hours before its release. 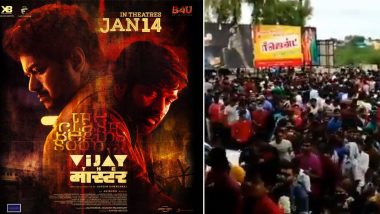 The highly-anticipated film Master, starring Tamil superstars Thalapathy Vijay and Vijay Sethupathi, could well be on its way to create a record at the box office despite opening amid the pandemic and being leaked on torrent websites hours before its release. Fans of the two actors started crowding at theatres since early morning on Wednesday for the opening show of the film, which has released on the big screen despite Covid pandemic. ‘Ithu #MasterPongal Da!’, Says Keerthy Suresh, Who Is Ecstatic To Watch Thalapathy Vijay And Vijay Sethupathi’s Film In Theatre

Film exhibitor Vishek Chauhan on Wednesday tweeted photos and videos from theatres in the city and even outside Mumbai. "#Master 7am shows are also done in parts of the world..it also goes #Housefull.. even during a pandemic.. #Master is a Blockbuster..#ThalapathyVijay is a leader!!" he tweeted. Announcing a huge box office opening for the film, trade analyst Taran Adarsh tweeted: "It's a #Tsunami at the #BO... #MasterFilm has a FANTABULOUS START... Only goes to prove *yet again*: Master: Thalapathy Vijay’s Film Turns Out Perfect Pongal Treat! Fans Watch FDFS And Share Reviews On Twitter

Give the audience what THEY want to watch and they will never disappoint you... Charm of watching a wellmade entertainer on big screen will never diminish. #Master #MasterPongal." Meanwhile, South actress Keerthy Suresh revealed on social media that she is back to the theatre after one year just to watch Master. "Can't even describe how ecstatic it feels to be back at a theatre after waiting for a whole year, and what's even better? It's for #Master Ithu #MasterPongal da! #MasterIsHere," the actress tweeted from her verified account early morning on Wednesday.

Crowd For Master Outside Cinema Hall:

Keerthy also shared photograph of a packed cinema hall with the film playing on the big screen. Directed by Lokesh Kanagaraj, Master also features Malavika Mohanan, Arjun Das, Andrea Jeremiah and Shanthanu Bhagyaraj in pivotal roles. The makers have also planned to release the film dubbed in Hindi on January 14 in cinemas across North India.

(The above story first appeared on LatestLY on Jan 13, 2021 02:30 PM IST. For more news and updates on politics, world, sports, entertainment and lifestyle, log on to our website latestly.com).