Master: Thalapathy Vijay’s Action Thriller to Release in Theatres and Not Have a Digital Premiere, Makers Issue Statement (View Tweet)

Thalapathy Vijay and Vijay Sethupati’s upcoming project Master is not releasing on Netflix. This Lokesh Kanagaraj directorial will hit the big screens, confirms the makers of the flick. Read the full statement here. 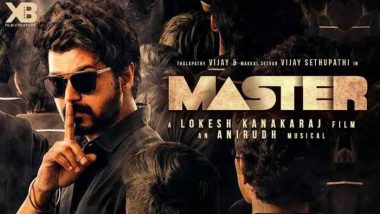 Thalapathy Vijay and Vijay Sethupati’s upcoming project Master has been making a lot of noise ever since the teaser of the film was out a few weeks back. The craze around the movie is so much that its teaser has crossed over 40 million views on YouTube. Amid this, a report in India Today mentioned that Master will be premiering on Netflix as the streaming giant has bought its right. However, looks like that’s not the case. As the makers on Saturday took to social media and cleared the air that the thriller is not releasing on any OTT platform and will hit the big screens soon. Master Teaser Out: Thalapathy Vijay and Vijay Sethupathi Lock Horns in This Gritty and Power-Packed Action Promo (Watch Video).

The makers in their post mentioned how releasing a film in the theatres is the need of the hour for the revival of the Tamil showbiz, which has incurred a huge loss due to the pandemic. “With lot of rumours surfacing in the past few days, we would like to clarify our stand on it. Though we have an offer from a reputed OTT service provider, we prefer to the theatrical release,” a part of the statement read. This sets the record straight. Master: Teaser of Thalapathy Vijay's 64th Film To Arrive on November 14 at 6 PM, Makers Announce News With A Fresh Poster Also Featuring Vijay Sethupathi (View Pic).

Earlier, Master was supposed to make it to the theatres in April this year, but it was unable to. Reportedly, the film will now be released in January 2021. Helmed by Lokesh Kanagaraj, apart from the leads, it will also feature Malavika Mohanan, Shanthanu Bhagyaraj, Arjun Das and Andrea Jeremiah in pivotal roles.

(The above story first appeared on LatestLY on Nov 29, 2020 09:52 AM IST. For more news and updates on politics, world, sports, entertainment and lifestyle, log on to our website latestly.com).