Nandamuri Balakrishna is one of the most sought after actors in Tollywood. The actor has teamed up for the third time with director Boyapati Srinu. The puja ceremony of his upcoming flick, which is tentatively titled NBK 106, took place today in Hyderabad. 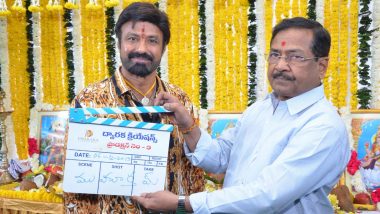 The music of NBK 106 will be composed by S Thaman. Produced by Miryala Ravinder Reddy, the shooting is expected to go on floors in early January 2020. The complete details of the cast is yet to be announced. Nandamuri Balakrishna and Boyapati Srinu have earlier worked together in films such as Simhaa and Legend, and both the films were commercially successful. If you haven’t seen the pics yet from the launch ceremony, take a look at them now.

#NBK106 begins with a formal pooja ceremony today. Glimpses from the launch...

Nandamuri Balakrishna recently wrapped up the shooting of his upcoming flick, Ruler. Directed by KS Ravikumar, this movie also stars Vedhika and Sonal Chauhan in the lead roles. Produced by C Kalyan under CK Entertainments & Happy Movies banners, this film is scheduled to be released ahead of Christmas. Ruler is hitting the big screens on December 20. Stay tuned for more updates from the work of entertainment.

(The above story first appeared on LatestLY on Dec 06, 2019 04:42 PM IST. For more news and updates on politics, world, sports, entertainment and lifestyle, log on to our website latestly.com).