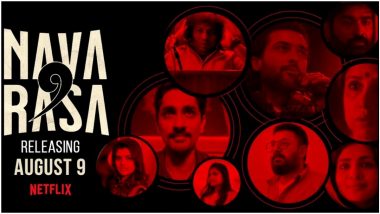 Like with every anthology, Navarasa has its highs and lows. A couple of the segments are superb, a couple of them passes muster and a couple disappoint. Let's review each story in Navarasa separately and rank them from Worst to Best.

Vetri (Atharvaa Murali) is a newly inducted CRPF officer, whose team gets ambushed by Naxalites in the forest but he manages to injure their leader (Kishore). We later learn that Vetri has gone missing while trying to take the captured leader to the headquarters, and his pregnant wife (Anjali) is rattling the police department daily to seek him out.

How Vetri went MIA is the rest of the tale, that is about seeking courage by doing the right thing, no matter the consequence. Thunintha Pin tries to show both sides of the government-Naxal clash, during the conversation that Vetri shares with the leader during their jeep ride. While Kishore is great in the role and Atharvaa serviceable, the segment leave the least impact and the climax is pretty tepid.

If we practised empathy diligently and tried to imagine ourselves in the other person's shoes, would that reduce all the crimes in the world? Bejoy Nambiar's Edhiri explores the concept of empathy, kindness and forgiveness, albeit in the aftermath of a violent act committed by Vijay Sethupathi's character on the husband of Revathy's character.

Edhiri offers very little surprises save for a twist around Prakash Raj's character, and is mostly performance-driven. Thanks to closeups and tight frames, the director ekes out incredible performances from his actors, especially Sethupathi and Revathy. The conversations around forgiveness and the pointlessness of vendetta has potential, but in the end, Edhiri is mostly remembered for the actors rather than the narrative. PS: Why is Sai Tamhankar there in the movie? After Mimi, this is yet another wasted opportunity for this fine actress.

When it comes to displaying love or jealousy for someone else's happiness, which emotion you let control you determines the kind of person you are. Vasanth's Payasam has us try to understand the psyche of an old Brahmin (Delhi Ganesan) who is supposed to give his blessings at a wedding in his family. But he is racked by jealousy for his relative, whose daughter is getting married. He is annoyed as to why this man has all the happiness, while he is going through loss and pain.

The setting in the agraharam adds a quaint quality to the proceedings. The idea is fine - weddings might be a moment of happiness for the couple and their immediate families, but does everyone attending the wedding share the same pleasure? However, the story is slow-paced, only making an impact in the last 10 minutes. A shorter runtime would have made Payasam more impactful. Aditi Balan's presence is mostly muted, save for the expression of disgust she shows in the climax, thus allowing the episode to live upto its 'emotion'. Though for short film going by the emotion of disgust, I expected it to be darker in its essence, which Payasam isn't much.

PS: The idea to stick to a 30-minute mark actually affects many of the episodes in the series. Also wondering why the need to set the story in 1965.

Actor Arvind Swami makes his directorial debut here with a tale on anger, social injustice and tricky narratives. A money lender is brutally attacked with a hammer by a young boy (Sree Raam), who gets arrested by the cop. A hot-heated cop (Riythvika) is desperate to make a criminal in her custody talk about why he committed the crime. How these two are connected makes for Roudhram's saga, though it is not that difficult to connect the dots.

The most striking feature of Swami's segment is the fiery performance by the young Sree Ram, who was so good in Pasanga and Goli Soda. The scenes between his character and his mother and sister do have heart and are what saves a very predictable storyline that would have left a limited impact. AR Rahman's BG score is another highlight here - there are some pieces that are quite good, like the music played when the protagonist is dribbling football. But at times, the score doesn't gel well with the proceedings. Santosh Sivan's frames are too good!

Malayalam filmmaker Priyadarshan creates a huge turnaround for himself, after his disappointing Hungama 2 earlier this year. And he does so in the same genre itself - comedy.

Summer of '92 is based on one of actor Innocent's lively tales from his childhood that he used to write in magazines. Here it is Yogi Babu who represents Innocent, playing a popular actor Velusamy returning to his alma mater as a chief guest. While the rest of the jubilant on his arrival, only his old teacher (Ramya Nambeesan) is visibly annoyed with his presence. Velusamy learns that she is still a spinster.

While addressing the podium, Velusamy remncises about his school experience, of how he was a failure in his classes and of his various pranks. How it mattered into his school teacher's life is hilariously recounted and it will definitely leave you in smiles.

Summer of '92 starts off on a vague note, and feels to meander about without any direction. It is around the mid-point mark where it gets into the real matter. Till then we are made to witness the mischievous acts of a young Velu, played excellently by Sakthivel. It is after when Velu is asked by his headmaster (Nedumudi Venu) to help him out in a bizarre task is when the film gets truly rolling. All the actors are good in their roles, including Bigg Boss Malayalam winner Manikuttan as the strict teacher who gets pranked.

If India ever tries to adapt Richard Linklater's classic Before Sunrise series, Gautham Vasudev Menon may find himself as one of the top candidates to helm that project. Guitar Kambi Mele Nindru sways that opinion for you, while it blends three of his favourite aspects - music, lyrical conversations and romance.

Suriya plays Kamal, a Grammy nominated musician who recalls during a performance an unexpected romantic chapter in his struggling phase. Prayaga Martin is the girl who breezed through in his life, and stirs the romance in him, as they discuss Beethoven to laws of attraction. She is charmed by the kind of music he produces, and he is inspired to make even better notes in her presence.

Like with the Before... series, Guitar Kambi Mele Nindru builds up the romance and the chemistry through the long-winding conversations that the two leads share. It is not something new for the director, as we have seen him try similar style, albeit in smaller doses, in his earlier romantic films like Vinnaithaandi Varuvaaya and Vaaranam Aayiram. But in my opinion, while the chemistry between Suriya and Prayaga was excellent, their conversations often felt artificial and forced, often dragging the runtime. While Suriya is his charming self, Prayaga was a bit too animated in her expressions. What makes this segment entirely likeable is Karthik's excellent score that becomes the soul of the episode. Navarasa Song Thooriga: Suriya and Prayaga Martin’s Melody Hits All the Right Beats in Netflix Anthology's First Single.

Oh my! Out of all segments in Navarasa, this one surprised me the most, because it tried to do something way different from others, and thus actually invoking the emotion in us, that it stands for -  Wonder. Arvind Swami plays Vishnu a reclusive scientist, who calls in another fellow scientist Krishna (Prasanna) at his home to discuss something very important. What he tells Krishna in the 15 minutes that he asked from him, leaves the latter stunned, and I really don't want to spoil the surprise for those who haven't seen the episode.

Though I can add that with Project Agni, the talented Karthick Naren enters into an arena previously explored by the likes of Dark, Stranger Things and to some extent, even Loki. However, it is less on action and more on talkie level, filled with exposition that needs to you to pay rapt attention to what is being said. It kinda reminded me of the underrated Hollywood film Man on Earth, in how it is framed, but the final twist could leave you surprised. The only thing is for a viewer is, as Vishnu tells Krishna - "You have to keep an open mind."! But was there any need for the on-the-face nomenclature of the three principal characters (there is a third character too that shares the name of another Vishnu avatar)?

There are also certain loopholes in the science that Project Agni tries to delve in. Like (SPOILER) why doesn't Vishnu feel suspicious that Krishna remembers his wife and son, despite his time-travelling meddling has erased them both?

After mildly exploring the subject in Jagame Thandiram earlier this year, Karthik Subbaraj once again deals with LTTE crisis in his segment for Navarasa. And he brings in his favourite actor Bobby Simha, along with making fellow director Menon act. Both play LTTE rebels who are setting camp opposite the army and keeping their enemies in sight, when they come across a boy from the nearby village. The boy (Master Tharun) asks them to save his younger brother, and after some reluctance, one of them agrees to do so.

Peace starts off okay, as it establishes the camaraderie of the rebels and the situation they are in (as well as Menon's stiff acting). But the short film immediately shifts to top gear when Simha's character goes to rescue the 'brother'. Full credit to cinematographer Shreyaa Krishna and editor Vivek Harshan for crafting that one-shot tracking sequence that takes this segment to vere level! The ending felt a bit melodramatic and underwhelming, but the whole treatment makes Peace one of the better episodes of Navarasa.

Inmai is a psychological thriller with supernatural elements. When Wahida (Parvathy) lets in a stranger (Siddharth), who she thinks is her company employee, in her rich mansion, she is attracted by his pleasing nature and their common fascination for calligraphy. To her shock, he turns out to be a sinister reminder of a sin she has committed in the past, and he is now here to collect the debt.

Inmai delves into the lore of djinn, and has some surprises in store for where it is heading. The director has kept the suspense right till the end, though the final reveal might elicit mixed reactions. What makes this episode arresting is the haunting atmosphere created for its setting, aided by Vishal Bhardwaj's score. Speaking of performances, Parvathy is surprisingly average here, though Ammu Abhirami who plays a younger Wahida leaves a better impression. It is Siddharth who steals the show completely, as his character seamlessly transforms from charming to scary to grieving.

(The above story first appeared on LatestLY on Aug 06, 2021 09:09 PM IST. For more news and updates on politics, world, sports, entertainment and lifestyle, log on to our website latestly.com).