Not The Family Man Season 2, Samantha Akkineni Made Her Hindi ‘Debut’ Nine Years Back and Most of Us Missed It! (LatestLY Exclusive)

Samantha's fans have been wondering why the actress hasn't made her Bollywood debut yet, like some of her peers - Tamannaah, Nithya Menen, Shruti Haasan, Vedhika etc. So what if we tell you that she has already made her debut in Bollywood and most of us have overlooked it? 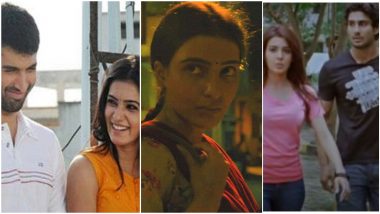 Samantha Akkineni, the beautiful and supremely talented actress, is getting fantastic reviews for her performance as the Tamil Eelam rebel Raj in The Family Man season 2. The web-series marks her first major foray into Bollywood territory in a major role, and with the kind of feedback that she has been getting for her performance, we hope that she will be open more to taking roles in more Hindi series and movies. The Family Man Season 2: From Manoj Bajpayee’s Srikanth to Samantha Akkineni’s Raji, Explaining the Final Fates of All the Major Characters.

Which might have made you wonder why it took Samantha more than a decade to have Bollywood beckon her? But what if we tell you  The Family Man Season 2 isn't her Hindi debut and that she has already made her debut in Bollywood which most of us have overlooked it?

As you know, Samantha's first role was the lead in Gautham Menon's 2010 film Ye Maaya Chesave, which was the Telugu version of the Tamil hit, Vinnaithaandi Varuvaayaa. She also appeared in a cameo in the Tamil film, playing the hero's (Simbu) friend who turns actress in his film, playing the role of his love,.

Gautham Menon had remade his best romantic film in Hindi too, as Ekk Deewana Tha in 2012. Starring Prateik Babbar and Amy Jackson (in her Bollywood debut) in the lead, the movie let Samantha reprise her role in Vinnaithandi Varuvaaya as the friend. However, her future husband Naga Chaitanya, who gave her company in Ye Maaya Chesave and Vinnaithaandi Varuvaayaa, didn't appear in the Hindi remake, replaced here by Tamil actor Ashwin Kakumanu.

Despite AR Rahman's hit score, Ekk Deewana Tha, however, failed to replicate the success of both the Tamil and Telugu versions, and was a flop at the box office. Hence Samantha's Hindi 'debut' went unnoticed. The Family Man Season 2 Review: Manoj Bajpayee and Samantha Akkineni’s Series Feels a Major Disappointment in Its Second Outing.

That was not Samantha's only tryst with Bollywood. She was also to make her debut as a leading lady in the industry, if everything had gone as planned, and once again, it would have been Gautam Menon who would be responsible.

In the same year that Ekk Deewana Tha came out, Menon made another romantic drama in both Tamil and Telugu simultaneously as Neethaane En Ponvasantham and Yeto Vellipoyindhi Manasu respectively. Samantha was the female lead in both the films, but the heroes were different - in the Tamil film, it was Jiiva (all set to make his Bollywood debut with '83) and in the Telugu version, with Nani.

But there was also a Hindi version in the works, with Samantha reprising her role there. The hero was played by Aditya Roy Kapur, and Menon even shot some portions of the film, called Assi Nabey Poore Sau, with the two actors, while releasing some promotional stills.

#TheFamilyMan2 released earlier today.. here's a look at the stills from the shoot of #AssiNabeyPooreSau (2013) by @menongautham, which could have been the Hindi debut of @Samanthaprabhu2 opposite #AdityaRoyKapur.

The film eventually got shelved. pic.twitter.com/LgWLzOqpEg

Sadly, maybe it was due to the cold reception that Ekk Deewana Tha got, this version never got made. And Samantha's North Indian fans are yet to see her as a leading lady in a Hindi film after that. Now that The Family Man 2 is out and got Samantha more fans in the Northern territory of the country, let's hope that we see her in a Bollywood movie soon.

(The above story first appeared on LatestLY on Jun 05, 2021 01:47 PM IST. For more news and updates on politics, world, sports, entertainment and lifestyle, log on to our website latestly.com).