PV Sindhu Shares a Happy Picture With Allu Arjun From an Engagement Ceremony, Calls Him the ‘Stylish Star’

While posting the picture, Sindhu captioned it - "With the stylish star @alluarjunonline." Allu Arjun's Pushpa - The Rise has crossed the Rs 300 crore mark worldwide and the star is all set for Pushpa 2. 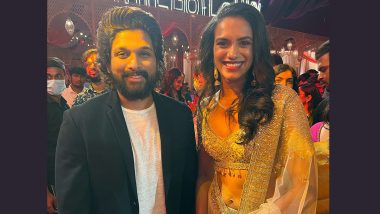 She may be the queen of the badminton courts but P.V. Sindhu has her share of fan moments too. The star shuttler shared a pic of hers with Pushpa actor Allu Arjun in the same frame. The picture of the two personalities has taken the Internet by storm with the loving comments from their fans flooded in the comment section. Allu Arjun Shoots On The Same Set As His Daughter; Says 'Pushpa Meets Bharata in Shaakuntalam' (View Pic).

The moment of the day came when Sindhu, who is the first-ever Indian woman to win two Olympic medals, was captured with the stylish star Allu Arjun at the engagement ceremony of industrialist Nimmagadda Prasad's son Nikhil in Hyderabad. Akshay Kumar Congratulates Allu Arjun for Pushpa The Rise’s Success; The Latter Replies With a Heartfelt Message!

At the event, Allu Arjun yet again brings up his uber cool look while he wore a black blazer on a white shirt paired perfectly with white shoes while on the other hand, Sindhu wore a beautiful lehenga. While posting the picture, Sindhu captioned it - "With the stylish star @alluarjunonline." Allu Arjun's Pushpa - The Rise has crossed the Rs 300 crore mark worldwide and the star is all set for Pushpa 2.

(The above story first appeared on LatestLY on Jun 27, 2022 06:45 PM IST. For more news and updates on politics, world, sports, entertainment and lifestyle, log on to our website latestly.com).