Shiva Rajkumar Birthday: 13 Songs Sung By The Actor In His Movies (Watch Videos)

From hating acting to becoming a superstar singer, Shiva Rajkumar's contribution to the Kannada film industry is immense. On his birthday today, we decided to talk about the songs he has sung in his movies. 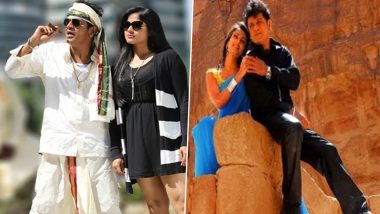 Shiva Rajkumar celebrates his birthday today. The actor has been a successful actor for over three decades now. Aided by his versatility and talent, Shiva Rajkumar or as he is popularly known SRK, has made a mark and managed to evolve beyond his father's, Dr. Shivakumar, illustrious shadow. But did you know he never wanted to be an actor? His younger brother Raghavendra had told DNA, "Not many people might notice, but if Shivanna is there in one scene, he is not there in the next scene. He would just throw his bags and run away. He hated acting." Then he came around and became a huge name in the Kannada film industry.  He isn't just an actor but a great singer as well. Bhajarangi 2: Shivarajkumar Is Excited About His Upcoming Movie Made on a Big Scale

On his birthday today, let us tell you about the 13 songs Shivarajkumar has sung so far in his career.

Which among these is your favourite Shiva Rajkumar song?

(The above story first appeared on LatestLY on Jul 12, 2021 08:10 AM IST. For more news and updates on politics, world, sports, entertainment and lifestyle, log on to our website latestly.com).