Silk Smitha had acted in about 450 films, most of them in Tamil, Malayalam and Telugu. Most of her roles had her as a sex siren, and in the '80s, her presence in a movie garnered more attention than the leading hero in the film. Some of Silk's popular movies in the era were Alaigal Oivathillai, Moondram Pirai (Sadma in Hindi) and Layanam. 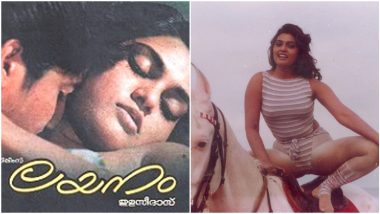 The late Silk Smitha might have been the crush of many men in the '80s and the '90s, but she had a troubled life till her tragic demise on September 23, 1996. She was just 35 then and had died by suicide. Married at a very young age of 17, she had ran away from her husband and in-laws after they mistreated her. She found her way into movies starting with supporting roles, and earning her breakout recognition through the 1979 Tamil film Vandichakkaram. The same movie also gave her what turns out to be the name she will be remembered for - Silk, after her character in the film. Silk Smitha Birth Anniversary: From Rajinikanth to Mohanlal, Actors with Whom This Controversial Beauty of South Indian Cinema Shared Screen Space.

Silk Smitha had acted in about 450 films, most of them in Tamil, Malayalam and Telugu. Most of her roles had her as a sex siren, and in the '80s, her presence in a movie garnered more attention than the leading hero in the film. Some of Silk's popular movies in the era were Alaigal Oivathillai, Moondram Pirai (Sadma in Hindi) and Layanam.

Before Kerala was in the grip of the Shakeela-wave in the early '2000s beginning with her film Kinnarathumbikal, Layanam was one of the biggest hits in the Malayalam softcore genre. The movie was about a married woman, whose husband is presumed dead, has a sexual affair with her young teenage servant boy. The movie also featured Devishri and Abhilasha, two other actresses who were popular then in the Malayalam softcore genre. Richa Chadha's Shakeela To Release In Theatres On Christmas 2020 And The New Poster Looks Fab (See Pic).

Layanam was such a money-spinner that it was dubbed into several languages including Tamil and Hindi. In Hindi, the movie was known was Reshma Ki Jawani, and was released in the late '90s. Reshma Ki Jawani also turned out to be a sleeper hit, and the name earned the film cult status.

While Layanam may have earned a milestone in cinema with its success, it left tragedy in the wake, namely with its two lead actors. As we know Silk Smitha had ended her life seven years after the release of the movie by hanging herself. She was going through severe financial and personal difficulties, and was also heavily in alcoholism. The Hindi movie The Dirty Picture, where she was portrayed by Vidya Balan, and the Malayalam film, Climax, where she was played by Sana Khan, eulogised her tragic life.

While Layanam may have no role in Silk's tragic death, the same cannot be said about the young Nandu, whose real name was Nandu. He was the youngest brother of actresses Urvashi, Kala Ranjini and the late Kalpana. His elder brother Kamal Roy was in the 1986 film Yuvajanolsavam, which starred his sister Urvashi and Mohanlal. He is the same guy in the song "Innumente Kannuneeril".

Prince had acted in a couple of films before Layanam, but this was his lead role. He also died a couple of years later, though the reasons for doing so aren't clear. Some of the news reports quote his close friends, who claim that the actor was in depression after his career never took off after playing the lead in a softcore film and was into drugs. He was just 27.

Layanam saw its two lead actors have their lives cut short by the cruel twist of fate, but even that only helped the film strengthen its cult status over the years.

(The above story first appeared on LatestLY on Dec 02, 2020 09:18 PM IST. For more news and updates on politics, world, sports, entertainment and lifestyle, log on to our website latestly.com).