Sivakarthikeyan aka SK is one of the multi-talented performer of Kollywood. He is not just a brilliant actor, but he’s also a fantastic singer and lyricist too. 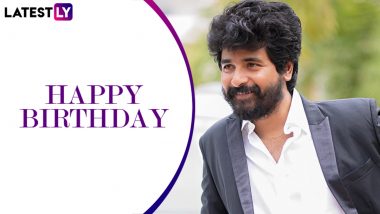 Sivakarthikeyan aka SK is one of the multi-talented performer of Kollywood. He is not just a brilliant actor, but he’s also a fantastic singer and lyricist too. In fact, before stepping into the world of cinema, he worked as a television presenter. SK started his career in television as a stand-up comedian. Sivakarthikeyan is also a producer and has bankrolled Tamil films under the banner Sivakarthikeyan Productions. Sivakarthikeyan Completes 10 Years In Cinema, Thanks Director Pandiraj For Giving Him ‘Marina’.

Sivakarthikeyan has huge fans across the world and one just can’t stop praising about his works. Today he celebrates his 37th birthday and on this special occasion, let’s take a look at some of his finest works as a lyricist. The songs written by him have turned out to be huge hit among the audiences.

Peppy number with fun beats that would drive anybody to get on to the stage and show their moves. This track is from SK’s film Namma Veettu Pillai and it has been composed by D Imman.

The film Adithya Varma has had some lovely romantic numbers and this particular track penned by SK has been audiences favourite. The song was sung by Ranjith Govind and composed by Radhan.

This is the first single from SK’s film Doctor and it went viral upon its release. From Sivakarthikeyan and Priyanka Mohan’s adorable chemistry to the peppy beats and relatable lyrics, the Anirudh Ravichander composed track became the most-loved song of 2021.

It’s a track from Suriya’s upcoming film Etharkkum Thunindhavan. A quirky number sung by Armaan Malik and Nikhita Gandhi, and SK’s lyrics has been loved by all.

The track from Thalapathy and Pooja Hegde’s upcoming film Beast is currently the hot favourite. It is a fusion of the Arabic and dappan koothu genres and SK lyrics are just making fans say Halamithi Habibo!

Sivakarthikeyan has penned the lyrics of the above hit numbers. Here’s wishing him a fantastic birthday with many more amazing projects.

(The above story first appeared on LatestLY on Feb 17, 2022 09:23 AM IST. For more news and updates on politics, world, sports, entertainment and lifestyle, log on to our website latestly.com).