Sudeep is one of the biggest superstars of Indian cinema. His fans swear by him. While he is also an actor who loves to play to the gallery, Sudeep has experimented with different genres and roles. That makes him one of a kind in this space who is not bound by his image. Check out his highly ranked movies on IMDb 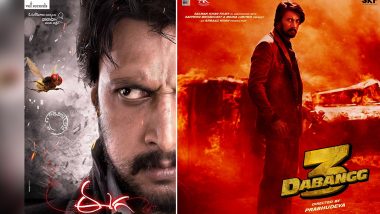 Sudeep celebrates his birthday today. While he is a competent and excellent actor, he also has one of the industry's best voices. Deep, husky, calm, and swooning-ly sexy, Sudeep's voice stays with you even after you are done watching his movies. In fact, even when you watch a film of his where he is the villain, Sudeep's voice lingers in your head for a longer time than the hero or anybody else. We believe it's not just the voice that deserves credit here but the actor's histrionics as well. His journey has been exciting and amazing. Carving a niche for himself and delving into all kinds of genres and roles, Sudeep is a league in himself.  Sudeep Birthday Special: 5 Interesting Facts About The Superstar That Will Blow Your Mind

When on his performances, we decided to dig up Sudeep's highest-ranked movies on IMDb. We aren't considering his cameos here.

Check them out here...

Who can forget Eega or as it is known in North India, Makhhi? SS Rajamouli's live-action movie helped Sasural Simar Ka defend turning its female protagonist into a fly. Sudeep played a ruthless businessman who is harrowed by a fly's revenge.

Rakhta Charitra was two-part series about rivalry and bloodshed. Sudeep played DCP. With voice and stance, Sudeep was simply fantastic.

Sudeep is a commando here who is finding out the cause of his brother's mysterious death. Many are calling it a suicide but Sudeep finds a few things fishy. The way he maneuvres the various clues to comes to the conclusion is damn intriguing.

Rann is one of the most underrated movies of Ram Gopal Varma which exposes the nexus that goes around in the newsrooms of television channels. Sudeep played the spoiled son of a channel head played by Amitabh Bachchan. What an impressive performance by Sudeep! Despite his wrongdoings, he makes you think about him in the hindsight at least once.

Kotigobba 2 does a lot to keep Sudeep fans highly entertained. While it falls a little short of utilising the actor's skills to the fullest, it does have its fun moments. Kabzaa: Upendra and Kiccha Sudeep Look Intense in the New Poster of Their Gangster Flick

Pailwan is a man's dream of fulfilling his father's dream. Sudeep plays a wrestler and his intense moments are the highlights of the film.

An interesting twist to the tale of Raam and Ravana, Sudeep is both Ram and Raavan. The switch between the two that the actor shows is simply fascinating.

Sudeep's first Hindi film Phoonk was one of RGV's those horror tales that left everyone extremely scared. Sudeep played a businessman and a father helpless to save his family as black magic wrecks havoc.

Sudeep returned to Hindi movies after a lot of years to be a villain in a Salman Khan movie. Critics were really appreciative of his skills although they wanted to watch little more of him.

(The above story first appeared on LatestLY on Sep 02, 2021 08:10 AM IST. For more news and updates on politics, world, sports, entertainment and lifestyle, log on to our website latestly.com).