Teddy: Arya’s Upcoming Movie Is the First Tamil Film to Use Indian Animation

Tamil star Aryas new film Teddy, directed by Shakti Soundarajan, is in the news for a special reason. Teddy becomes the first Tamil film to use an Indian company to design a special animated character. 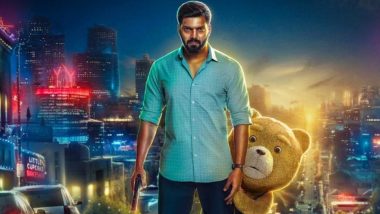 Tamil star Aryas new film Teddy, directed by Shakti Soundarajan, is in the news for a special reason. Teddy becomes the first Tamil film to use an Indian company to design a special animated character. It also becomes the second Tamil film to use motion-capture technology, to bring to life a teddy bear. In an interview, Director Soundarajan said: "Unlike the Rajinikanth's 'Kochadaiiyaan', ours isn't an animated movie. The technology has been used only for one particular character. We roped in an artist to bring the special character, which will appear for 80 minutes, live on screen." Teddy Teaser Released On The Occasion Of Arya and Sayyeshaa’s First Wedding Anniversary! Watch Video.

His previous film "Tik Tik Tik", a space-based theme, was also heavy on animation. Motion capture or mo-cap refers to the process of recording movements of objects or people. The specialists place sensors all over an actor. The sensor then tracks their movements, allowing them to be mapped on a computer screen in real time. Animators then create a virtual set for the movement to take place in. Director Shankar first used a form of mo-cap and 3D holograph for the song ''Kannodu Kanbathellam'' in Jeans (1998). Arya Stuns His Fans By Flaunting His Chiselled Look for Pa Ranjith’s Next (View Pic)

A few weeks ago, the makers released the song "En iniya thanimaye' from the film, which is a one-of-its-kind 3D lyrical video. The viral song has music composed by Imaan, lyrics by Madhan Karky and has been sung by Sid Sriram. Set to be released summer 2020, the film features real-life couple Sayyeshaa and Arya.

Meanwhile, Arya is preparing for director Pa Ranjith's next film. It is speculated that he will play the role of a boxer who hails from north Chennai. He even shared a video of his chiseled body. He posted a video of his workout on Twitter stating: "Ranjith sir, all set! My love for sports coming alive on screen All set to face the boxers in the ring with @beemji sir for our next. It's the most challenging film of my career. Loving the experience. #Ranjith sir is just phenomenal."

(The above story first appeared on LatestLY on Mar 11, 2020 01:17 PM IST. For more news and updates on politics, world, sports, entertainment and lifestyle, log on to our website latestly.com).