The makers of Teddy zeroed down the most apt date to release Teddy teaser, and fans are simply enthralled with it. March 10, 2020 is special as the film’s leads – Arya and Sayyeshaa – the real life couple, are celebrating their first wedding anniversary. 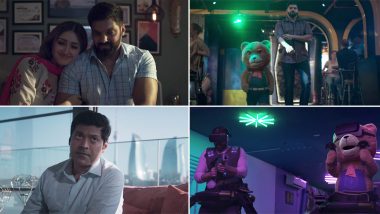 What a perfect day to release the teaser of the upcoming Tamil movie, Teddy! The makers of Teddy zeroed down the most apt date to release the teaser, and fans are simply enthralled with it. March 10, 2020 is special as the film’s leads – Arya and Sayyeshaa – the real life couple, are celebrating their first wedding anniversary. Not only that, on this day the film’s director Shakti Soundar Rajan celebrates his birthday and this day also marks the festival of colours, Holi. Whoa! Teddy The Film: Husband-Wife Duo Arya and Sayyeshaa Saigal in Shakti Soundar Rajan’s Next!

Teddy (the computer-generated special character) is seen along with Arya, playing a key role. Besides the Teddy interacting and grabbing every passerby’s attention, it is also seen helping Arya in some crucial events. The teaser also drops a hint about what goes on in a corrupt business world. Although it’s just a brief seconds of appearance of Sayyeshaa in this teaser, it does show a beautiful chemistry of her with Arya. Teddy teaser looks intriguing and promising. Arya’s Wife Sayyeshaa Saigal Shares Pictures of the Party Hosted in Chennai!

Watch The Teaser Of Teddy Below:

Sayyeshaa’s Post For Arya On Their First Wedding Anniversary

Happy Anniversary to the man who completes me in every way possible! Life without you is unimaginable jaan. Love, excitement, stability and companionship all at the same time! I love you now and forever! ❤️😘😍#besthusband @aryaoffl #happyanniversary#love#companionship#mylove#husbandandwife#forevermine#marriage#pure#instalove

Regarding the usage of motion capture technology for Teddy, director Shakti Soundar Rajan told TOI, “Unlike the Rajinikanth-starrer (Kochadaiiyaan), ours isn’t an animated movie. The technology has been used only for one particular character. We roped in an artiste to bring the special character, which will appear for 80 minutes, live on screen.” He further added, “This is the first time that an Indian company has worked to create a special character using computer graphics (CG); the CG work for films like 2.0 happened in foreign studios. Teddy will have more number of CG shots than my previous release, Tik Tik Tik. We are done with 50 per cent of the work.” Teddy is produced under the banner of Studio Green. The makers are yet to announce the film’s release date.

(The above story first appeared on LatestLY on Mar 10, 2020 12:13 PM IST. For more news and updates on politics, world, sports, entertainment and lifestyle, log on to our website latestly.com).