Thambi Trailer: This Karthi and Jyotika Starrer Is Packed With Emotions As Well as a Suspense (Watch Video)

Finally, the moment is here as the much-awaited trailer of Thambi starring Jyotika and Karthi in pivotal roles is out. The makers of this Tamil film unveiled the official trailer on Tuesday evening, making fans go wow with its visuals. Read on! 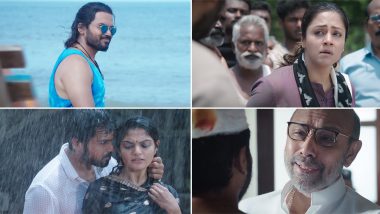 Finally, the moment is here as the much-awaited trailer of Thambi starring Jyotika and Karthi in pivotal roles is out. The makers of this Tamil film unveiled the official trailer on Tuesday evening, making fans go wow with its visuals. Each frame of the clip is so engaging that it will be impossible for you to not get engrossed. Thambi marks South stars, Jyotika and Karthi sharing the screen space for the first time. Thambi Teaser: Karthi and Jyotika's Thriller With a Dash of Family Drama Looks Highly Intriguing (Watch Video).

Now, coming to the trailer, the almost two minutes video takes you an intriguing family tale. The trailer starts with Jyotika riding a horse and thinking about her brother, Saravanan (Karthi), who had left the abode 15 years ago. Later, she is seen in conversation with her father. Sathyaraj portrays the role of the lead stars' father in the film. But well the turning point in the trailer comes in when Saravanan returns back home after 15 years. While all are happy about his return, it is Jyotika and her grandmother who feel that something is tricky and not right about Saravanan. Ahead the clip serves you LOL moments, thriller and we also get to see Saravanan making it into the world of politics. The trailer also sees actor Anson Paul in a cop role. Thambi First Look: Karthi and Jyothika's Film With Jeethu Joseph Gets a Title, Teaser Date OUT.

Check Out The Trailer Of Thambi Here:

Helmed by Jeethu Joseph and bankrolled by Viacom 18 and Parallel Minds Productions, Thambi is all set to make it to the movie screens on December 20 this year. So how excited about this family drama suspense film? Do let us know your thoughts in the comments section below.

(The above story first appeared on LatestLY on Dec 10, 2019 09:19 PM IST. For more news and updates on politics, world, sports, entertainment and lifestyle, log on to our website latestly.com).