The Great Indian Kitchen is the recently released Malayalam film that starred Suraj Venjaramood and Nimisha Sajayan in the lead, written and directed by Jeo Baby. 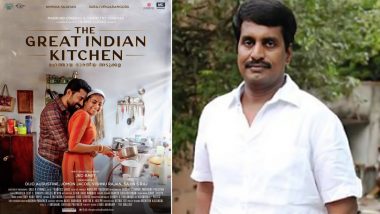 The Great Indian Kitchen to be remade by R Kannan (Photo Credits: Twitter)

The Great Indian Kitchen is the recently released Malayalam film that starred Suraj Venjaramood and Nimisha Sajayan in the lead as the onscreen husband and wife duo. Written and directed by Jeo Baby, this film was directly released on the Malayalam OTT platform, Neestream, on January 15, after it was rejected to be released by other streaming giants and television channels. The film shows how ‘a newly married woman struggles to be the submissive wife that her husband and his family expect her to be’. The Great Indian Kitchen Movie Review: Nimisha Sajayan and Suraj Venjaramoodu’s Social Drama Is Brilliant! (LatestLY Exclusive).

The Great Indian Kitchen opened to positive reviews for its engaging narrative, well-written characters, highlighting on patriarchal system, religion and much more. This much-loved film is now been remade by filmmaker R Kannan in Tamil and Telugu languages. As per industry expert Sreedhar Pillai, popular actors will be roped in for the remake versions and it is reportedly been planned to be released in theatres.

The Great Indian Kitchen To Be Remade By R Kannan

Most talked about #malayalam #OTT film of the year with record views #TheGreatIndianKitchen is now being remade by #Kannan. @Dir_kannanR is remaking it in #Tamil & #Telugu simultaneously with “popular actors in both languages” on strength of its script 4 a theatrical audiences. pic.twitter.com/roOVRK8vJ8

R Kannan had made his directorial debut in 2008 with the Tamil film Jayamkondaan that starred Vinay Rai and Bhavana. His second directorial project was Kanden Kadhalai, a remake of Imtiaz Ali’s Jab We Met. He has also remade the Hindi film Delhi Belly in Tamil titled Settai. There are many more intriguing films written and directed by him. We just cannot wait to hear more details on The Great Indian Kitchen remake!

(The above story first appeared on LatestLY on Feb 18, 2021 10:14 AM IST. For more news and updates on politics, world, sports, entertainment and lifestyle, log on to our website latestly.com).