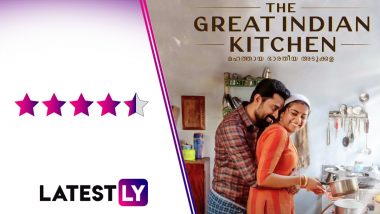 The Great Indian Kitchen Movie Review: There are films that you review FDFS because of the job demands and for the kind of hype they generate. And then there are films that you miss watching FDFS but you still review even if you are late because you want the good word to spread far and wide. The Great Indian Kitchen is one such film. Directed by Jeo Baby of Marimayam and Kilometres & Kilometres fame, The Great Indian Kitchen is one more fine example of how progressive Malayalam cinema is getting when the rest of the country's cinema is stuck (or being coerced) to tried-n-tested (and often regressive) content. Kerala State Film Awards 2020: Suraj Venjaramoodu’s Android Kunjappan 5.25, Fahadh Faasil’s Kumbalangi Nights, Nivin Pauly’s Moothon and More.

The Great Indian Kitchen begins with the heroine, played by the brilliant Nimisha Sajayan (can't say this is her finest performance, since she was equally fantastic in Thondimuthalum Driksakshiyum, Eeda and Chola). She is dancing at her academy, her smile consistently shining through telling us that she is enjoying what she is doing. This scene is interspersed with visuals of food being prepared in a kitchen, foreboding us of a life she is about to venture after she is married to her husband, played by Suraj Venjaramoodu.

The reason I am not using the characters' names here, and sticking to 'heroine'/'wife' and 'husband' ahead is because I don't think Jeo Baby isn't interested in sharing their names in the movie as well. The main characters become a personification of our own household, and giving them nomencular identities would have made The Great Indian Kitchen their personal story. Which is never the purpose.

In a little nugget of ironical humour, during the pennu-kanaal scene, the 'husband' inquires with his future 'wife' about herself. Before she could even reply, the scene cuts to his friend having a light conversation with her father. It's as if even the movie doesn't want us to explore her beyond being a wife to someone. Heck, we don't even know the age difference between the couple

The next scene, we see her getting married to the man, and becoming the bride of his old tharavadu house. The next day itself, she joins her mother-in-law in taking her share of responsibilities in the kitchen. From hereon, we see scene after scene of the 'wife' trying make one food item after another, cleaning after the men in the house, keeping the huge house spic and span and then going through an unenjoyable round of intimacy in the night.

Things become even more difficult for her, when her mother-in-law goes to stay with her pregnant daughter. Before that, we see how the mother-in-law is going through the chores of her house like a well-oiled machine, while her husband - the father-in-law - is just sitting around checking his WhatsApp messages.

At the daughter's house, we see her ditching her saree and opting for a more comfortable salwar kameez. There, she is still taking care of the household, but the woman looks more relaxed. Her husband, however, dependent on his wife to even bring his toothbrush for him, feels like a lost man and adds to the woes of the 'heroine'. From insisting that she cook at least rice on firewood to wash his clothes, including undies, by hand, the father-in-law's obstinacy to keep 'old values' intact only make the burdening problems of his daughter-in-law more tedious. 7 Malayalam Movies of Mohanlal, Jayaram, Sreenivasan That Were Remakes but Arguably Better Than the Original.

He also refuses her to take up a job, because women at home means raising better kids and thus making better families. BTW, he does all this without once scolding her! On the other hand, the 'husband' come across as a loving and a more liberal kind of person in comparison, even though he refrains to support her in front of his father.

We know that it is just a facade that would drop once the honeymoon phase is over, and it does in a very memorable scene at a restaurant, where the mask begins to wear off. For the 'wife', it's her Moment of Truth, her reality check moment from whereon she realises that she is in a marriage of hell. Just like the many women in this country. And to think, the 'husband' is a Social Sciences teacher at a girls only school! Have to say that Suraj Venjaramoodu does the transformation absolutely wonderfully, bringing out the darker greys of his role without making it feel drastic.

If Jeo Baby had cast unknown actors in the film, instead of Nimisha and Suraj, then The Great Indian Kitchen would have felt like a hard-hitting docudrama. We get scenes after scenes of the 'wife' going about with her household chores, often repetitive, while the men of her house are content with reading newspaper and doing yoga. The repetitive scenes, well-edited by Francis Louis, are done in a deliberate manner to create a sense of uncomfortable monotony, and makes you, not grateful, but guilt-stricken at allowing your mothers to spend their lives serving the family members. These 10 South Entertainers of Suriya, Allu Arjun, Dulquer Salmaan, Prithviraj, Aishwarya Rajesh Impressed Us the Most in 2020.

It is the little scenes in the film that create a bigger picture. When the couple visit a friend's house, his wife insists on sitting later with her little daughter while the son is already eating at the table, thus showing how girls are mentally enslaved at such a young age to adhere to patriarchy. The same scene also slyly hints towards the male characters' right-wing tendencies, when the discussion moves towards preparing beef. But perhaps, the biggest subversive moment in Jeo Baby's film comes right in the start itself - when instead of the pre-credits showing the usual 'Thank God', we get to see 'Thank Science'. And it is just a start of the film's critical attitude towards misogynistic religious outlook.

Instead of making the mother-in-law villain, which is the usual way to go, The Great Indian Kitchen points out how the men relishes the patriarchal world they have nudged in creating, mostly using religious customs as a safety measure. When we first see the 'wife' tell the 'husband' that she has periods, he tells her to not make food or do any work. For a moment, we are pleasantly surprised at what we perceive to be his sensitive nature. That deception is shattered because we realise she was only given a break, 'cos she was made impure by her menstruation.

The second time she is shown getting her periods makes for an even more difficult watch, as it coincides with the time her 'husband' has taken a 41-day Sabarimala vow. While I don't wish to say anything further, those scenes will leave you embittered, but more so, because of the self-realisation that we still haven't forsaken our narrow-minded attitude towards menstruation. But the 'wife''s patience is ebbing away like the dirty water dripping from the faulty faucet in her kitchen sink, and the outburst that finally happens is simply applause worthy.

I did wish that the movie would have ended there, as it would have made a more powerful impact. The epilogue, I felt, was a little underwhelming. But my wife, the smarter one of us duo, pointed out that sequence was needed to break the conception that a woman doesn't need a marriage to fulfill herself. Also, the last dance bit is fantastically choreographed.

I read in a couple of reviews (apologies for putting this one so late) that the social media angle inserted in the story was so weak. While it comes out all of a sudden in the film, the social media subplot isn't bad. If a whole majority of population can be brainwashed over WhatsApp forwards, can't a Facebook post instil a sense of uprising in a woman?

The Great Indian Kitchen is a bold and gutsy film for our times, not even willing to absolve religious practices of their flaws in suppressing women. It points out how even religious traditions like the Sabarimala vows - a sensitive issue for Malayali Hindus - can be more difficult for women, who can't even take part in it. Considering The Great Indian Kitchen is made by a Christian-born filmmaker, expect some outrage in the coming days by the bigots over this.

- A Film Made For The Times With Great Performances, Direction and Writing

- The Epilogue (but again, just my nitpicking because I felt the earlier closing moment was better)

Jeo Baby and team, TAKE A BOW! The Great Indian Kitchen is a powerful film that strongly takes an unflinching stand against kitchen politics, helped by the fantastic performances of Nimisha Sajayan and Suraj Venjaramoodu. It pricks your patriarchal conscience where it hurts the most, and is a film that every family needs to see. The Great Indian Kitchen is streaming on NeeStream, as well as Amazon Prime Video.

(The above story first appeared on LatestLY on Apr 02, 2021 09:03 PM IST. For more news and updates on politics, world, sports, entertainment and lifestyle, log on to our website latestly.com).