The Priest is a supernatural investigative thriller, written and directed by Jofin T Chacko. The movie stars Mammootty, Manju Warrier, Nikhila Vimal, Saniya Iyappan and Baby Monica. The Priest had released in theatres on March 11, 2021. The movie is now available to stream on Amazon Prime Video. 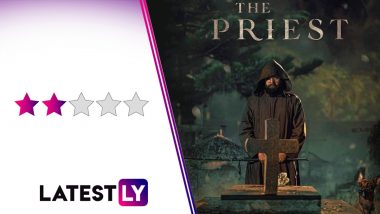 The Priest Movie Review: In Nerariyan CBI, there was this small plot point about an unrecognised spirit trapped as a negative energy in a room and the film's hero identifying it as part of a bigger murder investigation. Debutant Jofin T Chacko, who has written and directed The Priest, seems to have been inspired by this track but he reverses the trope in his film, interpersing the murder investigation into a supernatural story. And he manages to bring in the lead star of Nerariyan CBI - Mammootty - to be The Priest in his debut movie. The Priest Review: Mammootty's Horror Thriller Gets Mixed Response From Fans.

Mammootty plays Father Carmen Benedict, who is seen less in churches and more around crime scenes, helping police solve complicated crime cases. His latest investigation brings him to Ameya Gabriel (Baby Monica), a little orphan girl who was the sole witness to the apparent suicide of a rich heiress.

Ameya's strange and elusive behaviour piques the priest's curiosity, and even more so, when she becomes livelier and more responsive towards Jessie (Nikhila Vimal), a kind-hearted teacher who is newly recruited to her school and has a soft corner for the little girl. The Father decides to solve the incomprensible mystery around  the troubled Ameya and her odd fascination to her teacher, that makes him delve deeper into their pasts.

The Priest is both a supernatural thriller as well as an investigative drama, with the highlight being how Mammootty's character has been written. Compared his other recent mainstream roles - save for Unda - Father Carmen Benedict is restrained in his persona - no mass dialogues, or action scenes, but not as restrained as much we want him to be. There are still trademark slo-mo shots and careful angles to portray this never-ageing superstar in the most stylish way possible that the priest's cloak and bowler hat allow him to be.

What's even more affecting about Mammootty's image here is that his larger-than-life presence takes away the sting out of the film's supernatural portions. I mean, you know there is nothing to worry about when he is around. This is particularly evident in the scene where Benedict tries to exorcise Ameya for the first time, and she escapes her bindings and then proceeds to taunt them (only for her to inexplicably give back her control to the priest).

There is no denying that Mammootty brings the kind of gravitas to the role that makes you invested in the film, and there is also no denying that keeping his superstar image intact also reduces the tension aspect a lot. Just compare his scenes to the sequence where Nikhila Vimal's character is being troubled by the young girl, and you will get what I mean. The Priest To Release In Theatres On March 4; Here’s Why This Malayalam Film Is Special For Mammootty, Manju Warrier’s Fans!

However, more than Mammootty, it is the writing that lets down the film at several junctures. The Priest begins on a promising note - the investigation around the multiple suicides in a wealthy household and Ameya's presence in the house during one such death are intriguing. There is some curious buildup around Father Benedict's character - a religious-minded Sherlock Holmes to Kerala Police - that also keeps the ball rolling. And before we know it, that investigation track is wrapped up within 20 minutes, and the movie shifts focus solely on Ameya and her dangerously possessive nature towards Jessie.

Look, the shift isn't the real problem, but it is how average and flimsy the whole track turns out to be afterwards. There are no good scary portions or mind-blowing twists that leaves you on the edge of your seat. It also makes me wonder why waste time on the first mystery that also under-utilises a couple of popular actors. The worse part is that both the investigative tracks are woefully predictable - even before the hero makes his own conclusions, you can easily connect the dots and guess the trajectory where the movie is headed much earlier, while The Priest needs about 140 minutes to get to its limp finale.

Also, it would have been better if the makers had put Manju Warrier's presence in the film in wraps. I get the idea that The Priest marks for the very first time of bringing Manju and Mammootty on screen together, and that deserves to be promoted. But since Manju's cameo is very crucial in unravelling the suspense (if you want to call it that), then it was better for the viewers to not know she is there in the movie at all.

The real star of the film is the young Baby Monica, whose performance is unsubtly chilling and her expressions disturbing enough, especially her smirk. Unfortunately, the writing and the handling of the scenes around her character leaves very little terrifying impact than she should have deserved.

- The Performances Are Decent

- Lack of Genuine Scares or Twists

The Priest has your attention thanks to its intriguing premise and the presence of two great actors. Sadly, it lets down that interest of yours with a flimsy script that neither scares you nor keeps you arrested till the end. If only someone exorcised the bad writing possessing the film...

(The Priest had released in theatres on March 11, 2021. The movie is now available to stream on Amazon Prime Video, and the reviewer has watched the film on the OTT platform).

(The above story first appeared on LatestLY on Apr 14, 2021 05:35 PM IST. For more news and updates on politics, world, sports, entertainment and lifestyle, log on to our website latestly.com).