Tovino Thomas Birthday: 7 Pictures That Prove He Is a Doting Father to His Daughter Izza and Son Tahaan (View Pics) 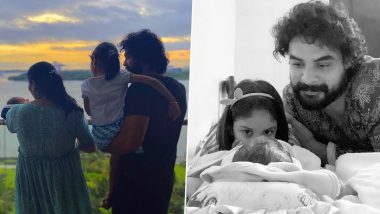 Malayalam actor Tovino Thomas has kept his fans entertained all throughout his career till now. The actor marked his debut in 2012 with the Malayalam film Prabhuvinte Makkal and has given a range of performances that made the audience fall in love with his acting. The actor took up all sorts of roles and is amongst the few stars who can carry a negative role like a true boss. The actor has portrayed roles which included protagonists, strong crucial characters and negative roles and won the Filmfare Award for Best Supporting Actor for his performance in Ennu Ninte Moideen and the Kerala Film Critics Association Award for his performance in Mayaanadhi. Tovino Thomas Gets Injured On The Sets Of Kala, Malayalam Actor Admitted To The ICU: Reports.

Besides acting, Tovino also worked as an Assistant Director in Roopesh Peethambaran's Theevram. He impressed everyone with his portrayal of the antagonist in ABCD. He went on to work with Mohanlal in Koothara and played a lead role in Roopesh Peethambaran's second directorial venture You Too Brutus. Other prominent films that Tovino featured in included films like 7th Day, Charlie, Maari 2, Guppy,  Oru Mexican Aparatha, Ezra, Godha, Lucifer, and others. His film Uyare was the first Malayalam film to release in South Korea.

But apart from being a stellar actor, he is also a doting father. The actor married his longtime girlfriend, Lidiya back in 2014 and they now have a daughter who was born in 2016 and a son who was born in 2020. Tovino often shares pictures of his daughter, Izza Thomas and son, Tahaan Thomas on social media and has also expressed his love for them. Today as the actor is celebrating his 32nd birthday today, we thought of digging into his Instagram and finding a few pictures that prove he is a loving father. Tovino Thomas Health Update: Malayalam Actor Kept Under Observation, Requires Three Weeks Rest.

Here the actor shared an adorable picture with his son and daughter and talked about how they changed his life.

Tovino shared an adorable picture where he is seen hugging his two munchkins. This picture is overflowing with love and ofcourse, cuddles!

This has to be the cutest picture shared by Tovino. He is seen holding little Tahaan with utmost diligence and it only proves what a caring father he is.

Tovino and Izza were caught adoring the new member of their family. Tovino looks absolutely calm in the photo which only shows how happy he is with hs kids around.

Daddy's hugs are the best and here we see little Izza indulge in some heartwarming cuddle sessions with daddy Tovino Thomas.

Tovino is seen spending so quality time with wifey and kids. While Lidiya is busy attending Izza, Tovino is trying to grab Tahaan's attention. Isn't this a lovely family picture?

Beautiful sunsets become even prettier when shared with your family. Tovino is a family man and this picture just sums that up perfectly.

These pictures surely have put a smile on your face and we hope to see more of these father-children fun sessions making it to Tovino Thomas' social media. He loves the #DadLife and we wish for nothing but more and more quality time with his little munchkins. Join us in wishing the actor a very happy 32nd birthday.

(The above story first appeared on LatestLY on Jan 21, 2021 08:20 AM IST. For more news and updates on politics, world, sports, entertainment and lifestyle, log on to our website latestly.com).