In keeping with the film's spirit that talks about women finding strength and standing up to their predators, the beautiful track is a perfect ode to women. 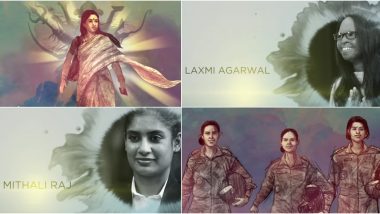 After the first look of Pawan Kalyan from Vakeel Saab, the Telugu remake of Amitabh Bachchan and Taapsee Pannu starrer Pink, the first song from the film is here. "Maguva Maguva" composed by Thaman S is a beautiful number dedicated to women, released especially on Women's day 2020. Taking to Twitter, Thaman wrote, "We from team #VakeelSaab dedicating this to all the lovely women out there." The song celebrates women and their achievements in a gorgeous video and fans are already going all gaga over it. In keeping with the film's spirit that talks about women finding strength and standing up to their predators, the beautiful track is a perfect ode to women. Vakeel Saab: Pawan Kalyan's Laidback Lawyer in Pink's Telugu Remake is Strikingly Different from Amitabh Bachchan's OG and Thala Ajith's Tamil Version.

Taking to Twitter, S V Creations who are producing the film, shared the song and wrote, "Celebrating the spirit of womanhood..Here’s the first single #MaguvaMaguva from Powerstar @PawanKalyan’s #VakeelSaab." The song has received a lot of love from fans of Pawan Kalyan who are sharing it on social media. The song features visuals of legendary Indian women who have made the country proud with their exceptional achievements such as Lata Mangeshkar, Kalpana Chawla, Laxmi Agarwal, Mithali Raj, PV Sindhu and more.

Vakeel Saab marks the comeback of superstar Pawan Kalyan to films after a gap and hence fans are more than excited for this film. This film is the second remake of Pink after Ajith's Tamil version Nerkonda Parvaai which released last year. Both the south versions have been produced by Boney Kapoor.  Ajith Kumar's Nerkonda Paarvai: 5 Differences Noticed In The Storyline of Thala's Film From The Original Plot Of Shoojit Sircar's Pink.

The film has been helmed by Venu Sriram and produced by Dil Raju’s Sri Venkateswara Creations banner. Vakeel Saab also stars Anjali and Nivetha Thomas in lead roles. The film's release date is yet to be announced.

(The above story first appeared on LatestLY on Mar 08, 2020 01:32 PM IST. For more news and updates on politics, world, sports, entertainment and lifestyle, log on to our website latestly.com).