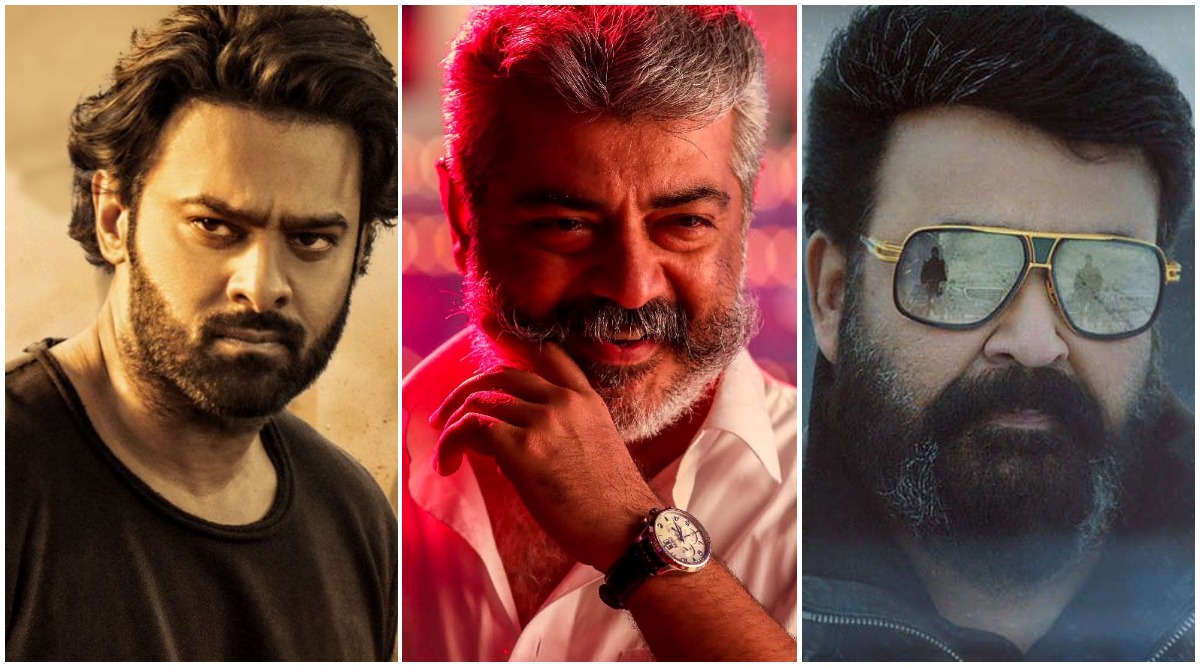 South Indian Cinema lovers were in for a treat in 2019. From comedy to action to thriller to romantic to sports drama, movie fanatics could watch every genre, and they were mind-blowing. The films were content driven and highly engaging. This year we also saw many movies that released in multiple languages, and yes, that did work wonders at the box office. Prabhas, Thala Ajith, Mohanlal, Thalapathy Vijay, and many other actors have ruled this year at the box office with some fantastic releases. From Atlee Kumar to Gowtam Tinnanauri: 6 South Directors Who Are Set to Work with Bollywood Superstars (View Pics Inside).

Saaho, Viswasam, Lucifer are some of the films that smashed records at the box office. There might be few films that did not have a super-hit verdict, but it still had a strong run at the multiplexes. There were several clashes this year and yet, the films sailed through successfully. Fans undoubtedly got to catch some amazing releases in 2019. So are you ready to take a look at those 10 films that managed to set fantastic records at the box office, worldwide? The list below, as per IMDB, are of those films that managed to gross Rs 100 crore worldwide. Let’s check it out! 96, Kaala, Vada Chennai, Aravinda Sametha, Sarkar - Best South Films Of 2018!

Saaho marked the debut of Prabhas in Bollywood and debut of Shraddha Kapoor in South Indian cinema. Directed by Sujeeth, this film was an action thriller was produced on a budget of more than Rs 300 crore. The film revolves around a sprawling criminal organisation engulfed in a power struggle following the death of their leader. It shows how intelligence agencies use this opportunity to take them down once and for all. Saaho was a visual spectacle, however it received mixed reviews from critics. It managed to earn more than Rs 420 crore worldwide.

The Tamil film Bigil starring Thalapathy Vijay and Nayanthara in the lead released on October 25. In fact the film is still running at the theatres successfully. Vijay played the role a father and son, and fans were mighty impressed with his performance. This film directed by Atlee was made on a budget of Rs 150 crore and it emerged as the top-grossing Tamil film of 2019. Bigil, which is still running at the theatres, minted Rs 287.1 crore worldwide. It managed to break the record set by Rajinikanth’s film Petta.

Written and directed by Karthik Subbaraj, Petta marked the filmmaker’s maiden collaboration superstar Rajinikanth. It featured the superstar as an elderly man who gets hired as a hostel warden, but things change he comes across a group of gangsters. Petta was released on 600 screens in Tamil Nadu. The film made on a budget of approximatley Rs 150 crore, it minted Rs 225 crore worldwide.

The film Maharshi was extremely special to Tollywood star Mahesh Babu as it was his 25th project. Released on May 9, it featured Mahesh as Rishi Kumar, CEO of a US-based software company. Things take a turn when he returns to his homeland, sees the plight of the farmers and the agricultural activities. The film directed by Vamsi Paidipally was declared as hit. Made on a budget of Rs 90 crore, Maharshi earned Rs 184.6 crore at the box office worldwide.

Viswasam released in January and it is still in the talks amongst the fans. Ajith Kumar and Nayanthara’s film directed by Siva was indeed super-hit. This family drama made on a budget of approximately Rs 100 crore, garnered Rs 184 crore worldwide. The Telugu-dubbed version with the same title was released on March 1, whereas the Kannada version titled Jagamalla was released on March 7.

Anil Ravipudi directorial F2: Fun and Frustration starred Venkatesh, Varun Tej, Tamannaah Bhatia and Mehreen Pirzada in the lead. It was produced under the banner of Sri Venkateswara Creations, and this movie turned out to be the most profitable and highest grossing film for the banner. The comedy drama made on a budget of Rs 30 crore, managed to earn Rs 140.5 crore worldwide.

Kanchana 3 is not only written and directed by Raghava Lawrence, but he is also playing the lead role in the film. This movie was the fourth installment in the Muni series and third installment in Kanchana series. This horror comedy made on a budget of Rs 40 crore was declared as a blockbuster. It minted Rs 130 crore worldwide.

Lucifer marked the directorial debut of Prithviraj Sukumaran, with superstar Mohanlal in the lead role. Bollywood actor Vivek Oberoi who plays a negative role, this movie marked his debut in Mollywood. As per the IMDB list, Lucifer is the only Malayalam movie of 2019 that managed to gross Rs 100 crore worldwide. Made on a budget of Rs 25 crore, it minted Rs 128 crore worldwide. Lucifer is currently the highest-grossing Malayalam film ever, beating Mohanlal starrer Pulimurugan. Let’s not forget, we are going to get to watch Empuraan, which is neither a sequel nor a prequel to Lucifer. About it Prithviraj was quoted as saying, “It will explain what happened before the Lucifer movie and what will happen after.”

Here we have one more movie of Thala Ajith that turned out to be a hit this year. Nerkonda Paarvai was a remake of the Hindi film Pink, starring Amitabh Bachchan in the lead. Critics and fans lauded Ajith Kumar’s performance in Nerkonda Paarvai, made on a budget of Rs 50 crore. This legal drama managed to earn Rs 108.5 crore worldwide.

So these were the 10 South Indian movies that managed to gross more than Rs 100 crore (minimum) worldwide. They were commercially successful as well as entertaining. Let’s wait and watch how the movies in 2020 manages to win audiences hearts.