In this special feature, we list down our favourite 10 Malayalam films of 2019, that you should watch, if you haven't already! 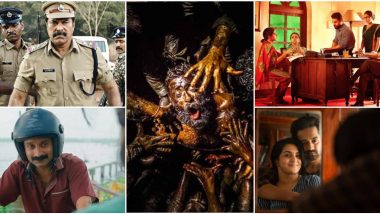 Before this decade ushered in, Malayalam cinema was going through a really rough phase. In the previous decade, we had seen an influx of softcore movies, lowbrow masala entertainers and two-hour-long mimicry skits masquerading as comedy films. With the ascent of the new decade, the audience's patience with Malayalam cinema was wearing thin. So a bunch of daring filmmakers decided to go against the flow and experimented with the formula. I could pinpoint the late Rajesh Pillai's Traffic as the film that inspired the movement, though the journey began even before that. The successes of these movies proved that content is king, even if your films don't have a Mammootty or a Mohanlal in the lead. Year Ender 2019: Mammootty, Parvathy, Nivin Pauly and More – 10 Actors Who Owned Malayalam Cinema This Year With Their Marvellous Performances.

While the experimentation streak also produced some really awful movies, filmmakers have now seemed to get control of their storytelling skills. Malayalam cinema has produced some really fine movies in the past couple of years, that made the rest of the country sit up and realise that some of the best quality movies are coming from God's Own County. And 2019 is no different, giving perhaps a few of the best Indian films of the decade. The surprising fact is that most of the films are made by first-timers, and some of them do not even have a superstar headlining the cast.

In this special feature, we list down our favourite 10 Malayalam films of 2019, that you should watch, if you haven't already!

When the whole country debated over how strong Kabir Singh was in its depiction of toxic masculinity, Malayalam cinema went ahead and made a film that is quite the antithesis of everything Shahid Kapoor's film hailed about itself.

Beautifully photographed, Kumbalangi Nights, directed by Madhu C Narayanan, takes on patriarchy, sexism and masculinity and handles them in a very nuanced manner, The cast is excellent, especially Soubin Shahir, Anna Ben and a deliciously evil Fahadh Faasil. Not to mention, Kumbalangi Nights also boasts of a lovely soundtrack.

Parvathy Thiruvothu delivers one of her best performances in this inspiring film that, despite little niggles, earns its winning spirit. Narrating the story of an acid attack survivor whose dreams to spread her wings don't dissolve away, Manu Ashokan's Uyare stubbornly refuses to evoke sympathy for its protagonist and we love the movie for that.

Giving ample support to an excellent Parvathy is an adorable Tovino Thomas, a terrific Siddique and Asif Ali, whose morbidly dark turn surprised the hell out of us.

Hey, when you name your movie as Ishq, why really go the other way round? Apparently, no one told director Anuraj Manohar about this, as he made a film that takes some really dark turns that you will think twice before taking your girl out for a romantic night out.

Ishq first gives you an impression of a lovey-dovey tale of two youngsters who just became a couple. And then as you settle into the idea of seeing more mushiness, Ishq pulls the rug off your seat and delivers a heart-thumping psychological thriller that explores dark aspects of moral policing and toxic masculinity. Also watch out for an excellent display of acting from Shane Nigam, Ann Sheetal and Shine Tom Chacko.

Bollywood film Ujda Chaman and Malayalam film Thamaasha are official remakes of the Kannada film Oru Motteya Kadhe. Both came out the same year. And yet it is Thamaasha that feels significantly close to the original, both in terms of quality and its humour. May I take the sacrilege to say it was a tad better too.

Directed by Anuraj Manohar, Thamaasha had a ready-made casting in a likeable Vinay Forrt to play the role of a prematurely balding young professor. Thamaasha explores the difficulties faced by the protagonist to get a girl with lovely touches of humour, all the while, showing that even he is as flawed as the people who see his bald pate as an aberration. That too, without going overboard, something which the Hindi remake failed to control itself.  Ujda Chaman: Forget the Sunny Singh-Starrer, Watch the Malayalam Film Thamaasha That Deals With Premature Balding in a Humorous but Sensitive Manner.

After watching Virus, the first question that comes to your mind is, how did Aashiq Abu manage to do it? Handling a huge roster of talented stars and giving everyone one of them enough moments to shine, Aashiq made a fantastic medical thriller that keeps you besotted, terrified and stunned with each frame.

Sure, the narrative borrows its framing from Steven Soderbergh's Contagion. But Virus evolves into its own beast, taking inspiration from the real-life Nipah epidemic that had threatened Kerala on a few occasions. Virus, however, goes beyond being a thriller and ends up ultimately being an ode to humanity. With stellar performances from the cast, especially Rima Kallingal, Parvathy, Indrajith Sukumaran and Soubin Shahir, this is a must-watch!

Mammootty has been part of some very disappointing movies in recent times like Madhura Raja, Pathnettam Padi and Ganagandharvan. But then he goes on to give us a film like Unda, that makes us almost forget about the other movies.

Unda, directed by Khalid Rahman, is a light-hearted film about a unit of Kerala police sent to Jharkhand to protect a polling booth but without proper ammunition. Mammootty plays the leader of one such unit, a policeman who has never caught a thief before and who nearly suffers a heart attack at the first sign of danger. More than a story, the film is filled with moments with a supporting ensemble cast offering great support to the superstar.

Were you a teenager who preferred being distracted by that crush in your class than finding focus on solving algebra problems? Then this delightful film, directed by Girish AD, is for you. Taking you back to your high school days, the movie is about a teenage boy Jaison trying to win the affections of a pretty Keerthy, while, at the same time, also tackling an over-smart new lecturer.

The young cast members are all naturally talented, especially the leads Mathew Thomas and Anaswara Rajan. Vineeth Sreenivasan is terrific as the bothersome lecturer. The movie is filled with enough humourous moments, and an entertaining soundtrack, not to mention, a very relatable romantic track.

Lijo Jose Pellisseri's latest film is what you can call a visceral cinematic experience that is bound to suck you in, whether you want it or not. While it may have nothing to do with the Jallikattu festival of Tamil Nadu, a buffalo does play an integral role in the film, and its escape sets a chain of events in a hamlet that turns humans into murderous maniacs.

Not only is Pellisseri in fine form and so is the cast, but Jallikattu also owes a lot to the camerawork of Girish Gangadharan and Prashant Pillai's BG score for making it such an evocative piece of cinema. And that final scene...damn...such a revolting, yet hypnotic visual that will stay with you for long. Especially when you see what's happening around you IRL.

From one dark cinema to another. In a year that ostracises toxic masculinity (one more to go in the list), Sanal Kumar Sasidharan has gone ahead and made a trilogy on the subject. Both his earlier films in this saga, Oru Ozhivadivasathe Kali and S Durga received critical acclaim, and his latest, Chola, rounds up the trilogy in the aptest way possible. Or should I say, the darkest!

With the focus on three characters - a naive schoolgirl, her wimpy lover and his unpredictable boss - Chola is about a forbidden excursion for the girl into the city that goes horribly wrong. Sasidharan marks every visual in the film around the girl as a harbinger of what's to come, leaving an atmosphere of tension and horror throughout. Nimisha Sajayan and Joju George give the performances of their lifetime in the movie.

Malayalam cinema has made so many movies in the past that casually refers to sexism, patriarchy and toxic masculinity. But after 2019, it's hard to look back at those movies and then wonder how you could have missed those glaring flaws. Nisam Basheer's Kettyolaanu Ente Maalakha explores an aspect of real-life marriages that conventional cinema rarely explores, despite playing around with birds and bees.

Even though the title suggests a feel-good marital drama, the movie takes some really unexpected turns while delving into the dilemma of a recently-married middle-aged man who had never been intimate with a woman before. Asif Ali delivers his career-best performance, with Veena Nandakumar and Manohari Joy also pitching in good acts.

(The above story first appeared on LatestLY on Dec 10, 2019 10:40 AM IST. For more news and updates on politics, world, sports, entertainment and lifestyle, log on to our website latestly.com).