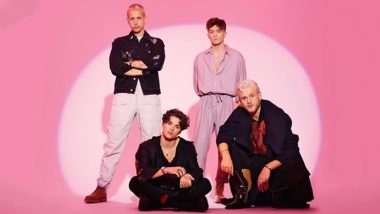 UK band The Vamps are back with a new single, Married In Vegas, that was created remotely in lockdown. It is from their album "Cherry Blossom", which is set to release on October 16. "This is our new single ‘Married In Vegas' out at midnight from our 5th studio album. Cherry Blossom signifies rebirth, 2 years in the making, thank you for your support and patience," read a tweet from the official handle of the band, which consists of Brad Simpson, Connor Ball, Tristan Evans and James McVey. Rapper Raja Kumari Says Her New Song ‘NRI’ Celebrates the Duality of Being from Two Different Cultures

Earlier this year, the new album was sent to their label. A few singles were left to be decided on. They knew they had a collection of bangers and ballads that told the story of a band re-born, but they weren't entirely certain about which song should properly mark the start of The Vamps Part 2. "On the day we handed the album in I went on a Zoom call with Lostboy (producer)," said Brad. Demi Lovato Is Back With a Bang With Her New Song ‘I Love Me’ (Watch Video)

"We had a few beers and then four hours later 'Married in Vegas' was birthed." James added: "I was playing Playstation with my mates and it was about 11 p.m. and I was pretty drunk too actually. Then Brad FaceTimed me and he was like 'I've just written this song!' I love moments like that because even when you think something's done it can still change at the last minute. They jumped on a Zoom with Lostboy the next morning to finish the song.''

(The above story first appeared on LatestLY on Aug 01, 2020 01:55 PM IST. For more news and updates on politics, world, sports, entertainment and lifestyle, log on to our website latestly.com).