We bring you the list of major theatrical releases of the week and June 10, Friday will be a busy one for the cinema halls as in total 5 major releases will hit the silver screens this week. 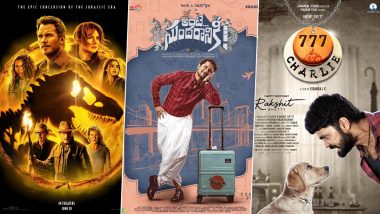 June started with a bang with Kamal Haasan's Vikram, Akshay Kumar's Samrat Prithvi Raj and Adivi Sesh's Major releasing in the first week. Not to forget Kartik Aaryan's Bhool Bhulaiya 2 that is still there to compete in the big screens as it is close to Rs 150 crores at the Box Office. Talking about the coming week, one big Hollywood release titled Jurassic World Dominion has all our attention and will be a busy week as 5 Indian releases are also lined up to hit theatres on June 10. Ms Marvel: Farhan Akhtar Pens Appreciation Note for Lead Iman Vellani and Team Ahead of Show’s Disney+ Hotstar Release.

Jurassic World Dominion is finally releasing in India on June 10 and the fantasy adventure film that is all set to be the sixth instalment in the Jurassic Park franchise marks the return of the iconic OG trio from the Steven Spielberg classic from 90s Laura Dern, Sam Neill and Jeff Goldblum. They return to assist Jurassic World’s Chris Pratt and Bryce Dallas in this 46-minute movie full of action and madness. Catch the film in the cinema hall near you on June 10.

Janhit Mein Jaari is Nushrratt Bharuccha's upcoming social dram starring Vijay Raaz and Anud Dhaka. The plot of the film revolves around Nushrratt's character who is a salesgirl that sells condoms for a living despite societal objections. Helmed by Jai Basantu Singh, the film is all set for a release on 10th June 2022.

Nani's Ante Sundaraniki is the next big Telugu release and it's a modern-day romantic comedy that tells the tale of two individuals from different religion falling in love with each other and working it out. Helmed by Vivek Athreya, the film marks the Telugu debut of Malayalam actor Nazriya Fahad and will hit theatres on June 10.

777 Charlie is an upcoming Indian Kannada-language feel-good film helmed by Kiranraj K that beautifully showcases the pure relationship of a man and his pet dog It also features Rakshit Shetty, Sangeetha Sringeri and Raj B. Shetty in key roles. 777 Charlie to arrive in cinema halls near you from June 10.

Nivin Pauly's upcoming Malayalam movie The Harbour is based on the famous protests against the 'chappa' system that was practiced in the Cochin harbor during the 1950s. The film is adapted by a play of the same name and it also features Joju George, Indrajith, Sudev Nair, Manikandan, Arjun Asokan, Nimisha Sajayan, Poornima Indrajith, Darshana Rajendran in major roles. Originally titled Thuramukham, The Harbour is slated for June 10 release.

(The above story first appeared on LatestLY on Jun 07, 2022 06:49 PM IST. For more news and updates on politics, world, sports, entertainment and lifestyle, log on to our website latestly.com).