Nick Jonas will reportedly get engaged to Bollywood diva Priyanka Chopra soon but you might want to go through these hot pictures first! 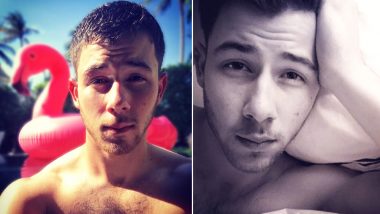 Nick Jonas and Priyanka Chopra are the hottest power couple in the showbiz industry right now. The two have been making the fans curious and excited about their relationship that has turned to be pretty 'serious' in a couple of months. The Quantico actress is reportedly getting engaged to the 25-year-old star soon and the rush around it is making every Bollywood fan dig a bit more about Nick. They say that pictures speak a thousand words and Nick's Instagram account is a proof why PC fell in love with this international sensation in the first place!

For those who are uninitiated, Nicolas Jerry Jonas is an American singer, songwriter, actor, and record producer. With above 15 million followers on Instagram, the handsome star is quite in demand by the global fans. Just if you go through his pictures right below, you will know the reason behind attaining that large number of followers.

Hanging with the homie.

Thank you @GQThailand for an amazing shoot! All that smolder training from @therock feels like it’s finally paying off 😂

Why am I still awake?

This Is How He Looks When He Goes Through Your Insta Comments!

Hello From the Other Side

Nick and PC were first seen together at the MET Gala event. Since then, they ahve spotted several times on various occasions. He even came to India with Piggy Chops to meet her family and close friends. All in all, looks like things are just a few steps away from being official for this couple. How do you like Nick and PC's pair? Do let us know in the comments section below.

(The above story first appeared on LatestLY on Jul 11, 2018 12:51 PM IST. For more news and updates on politics, world, sports, entertainment and lifestyle, log on to our website latestly.com).