Sony TV's popular dance reality show India's Best Dancer found its winner in Ajay Singh aka Tiger Pop, who hails from Gurugram, and is known for his popping. 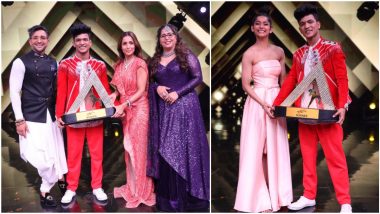 Sony TV's popular dance reality show India's Best Dancer found its winner in Ajay Singh aka Tiger Pop, who hails from Gurugram, and is known for his popping. On Sunday night as the Grand Finale of the show culminated, in a nail-biting moment, from amongst the 5 best finalists, Tiger Pop was announced as India’s Best Dancer. India voted wholeheartedly for their favourite finalists and the total votes clocked in for the finale of the very first season of the show were 3 crores 28 lacs. Tiger Pop was awarded the trophy and a cheque of Rs 15 lakh from Sony TV's business head Mr Danish Khan. Tiger Pop was also awarded a Maruti Suzuki Vitara Brezza while his choreographer Vartika Jha received a cheque of Rs 5 lakh. Taarak Mehta Ka Ooltah Chashmah: India's Best Dancer's Next Episode To Welcome TMKOC Team To Celebrate Its 3000 Episodes Completion.

Tiger Pop, ecstatic about winning the title of India’s Best Dancer, said, “I am beyond happy to have won the coveted title of India’s Best Dancer. I cannot believe that my childhood dream of being on a platform like India’s Best Dancer and winning it, has come true today. The whole journey of being on India’s Best Dancer, right from my very first audition, to my first battle, to being paired with a choreographer like Vartika Jha, to performing & learning something new week on week has been surreal. Standing here on this stage made me realize that adulation cannot be taken for granted. You have to work hard to earn in. I am thankful to all the judges for keeping us grounded and being an inspiration to all of us. I am grateful and overwhelmed for all the love that I have received from all over the world.” Congratulations Ajay Singh!

(The above story first appeared on LatestLY on Nov 22, 2020 11:30 PM IST. For more news and updates on politics, world, sports, entertainment and lifestyle, log on to our website latestly.com).