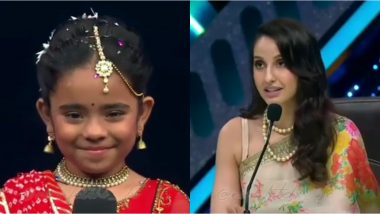 Nora Fatehi has been gracing the reality show, India's Best Dancer, temporarily. She was a substitute judge for Malaika Arora who stepped away from her duties while she recovered from COVID-19. Well, during her stint on the show, Nora managed to win hearts all over. She also made many headlines. In one such incident, Nora was so delightfully impressed by one of the kids named Rupsa's performance that she offered the little girl her next international music video. "You are there with me in my next international music video," Nora promised the kid. Nora Fatehi's Like an Oasis in the Desert in her New Photoshoot for Travel+Leisure Magazine (View Pics).

Nora Fatehi shot to global fame with her performance on Dilbar for the film, Satyameva Jayate. She has produced and sung for an Arabic version of Dilbar which also went on to earn acclaim. After which, she produced an international song Pepeta with Ray Venny. We are eagerly looking forward to seeing her next International music video and seeing if she keeps her word given to the kid. Terence Lewis and Nora Fatehi Issue Clarification after a Video of His Hand Brushing Against Her Butt Goes Viral on the Internet.

After making the promise to Rupsa, Nora also listened to a request from her. Rupsa asked the actress to join her on stage to dance on "Saki Sakki". Nora obliged and grooved to the song wearing a saree.

On the work front, Nora was last seen in the movie Street Dancer 3D. She plays a supporting role in the upcoming film, Bhuj: The Pride of India, which will drop on Disney+ Hotstar.

(The above story first appeared on LatestLY on Oct 02, 2020 08:43 PM IST. For more news and updates on politics, world, sports, entertainment and lifestyle, log on to our website latestly.com).