Akasa Singh is a confirmed contestant on Salman Khan's Bigg Boss 15. Here's everything you need to know about the BB 15 player. 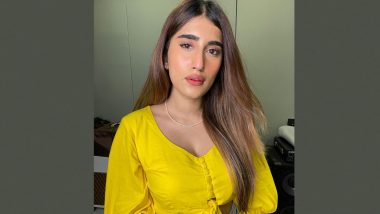 Akasa Singh aka AKASA is a confirmed contestant who will enter Salman Khan's show Bigg Boss 15 and the 27-year-old singer is a known name in the music industry. She is best known for her song 'Naagin' with Aastha Gill. Akasa was also a contestant in Amazon Prime's reality show The Remix with DJ Skip. Akasa was a contestant in India's Raw Star. From there, show's mentor Himesh Reshammiya helped her to debut in the Bollywood, as he was impressed by her performance. Akasa hails from Mumbai. Bigg Boss 15 New Promo: Akasa Singh, Tejasswi Prakash Are All Set To Make a Smashing Entry in the House (Watch Video).

Akasa has also done a mashup of Ed Sheeran's 'Shape of You' and Badshah's 'Mercy' and released a cover version of 'Zara Zara' song from the movie Rehnaa Hai Terre Dil Mein. She had many popular movie songs to her name like 'Aithey Aa' from Bharat, 'Dil Na Jaaneya' from Good Newzz, also many hit singles like 'Thug Ranjha', 'Maserati', 'Yaad Na Aana, Shola', 'Teri Meri Ladayi', etc. FYI, her debut pop single 'Thug Ranjha' crossed 27 million+ views in one month and became the most watched Indian video worldwide on YouTube. Also, there is no such controversy and affair history attached to her name. Simba Nagpal in Bigg Boss 15: Career, Love Story, Controversies – Check Profile of BB 15 Contestant on Salman Khan’s Reality Show!

The singer grew up in a musical family. Her father was a music director and a Punjabi pop singer. Bigg Boss 15 confirmed contestants list includes Umar Riaz, Donal Bisht, Shamita Shetty, Nishant Bhat, Simba Nagpal, Tejasswi Prakash and Pratik Sehajpal, among others. Ahead, Salman Khan's reality show's promo has further revealed glimpses of a few contestants which hint they are Karan Kundrra and singer Afsana Khan. Salman Khan's Bigg Boss 15 is all set to premiere on Colors TV on October 2 (Saturday). You can watch the controversial reality show on Saturday and Sunday at 9:30 pm and from Monday to Friday at 10:30 pm.

(The above story first appeared on LatestLY on Sep 30, 2021 06:10 PM IST. For more news and updates on politics, world, sports, entertainment and lifestyle, log on to our website latestly.com).