Avika Gor is one of the popular faces in the television industry. On the occasion of her birthday, let’s take a look at some of the popular TV shows the Balika Vadhu actress starred in. 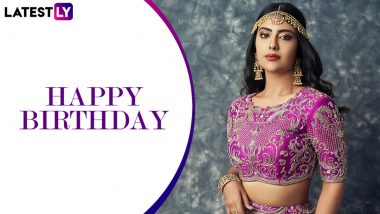 Avika Gor is one of the popular faces in the small screen industry. She has appeared in numerous TV shows that have been a huge hit. Her role as Anandi in Balika Vadhu shot her to fame. Avika, who has turned a year older today (June 30), has not just worked in Hindi TV serials, she has also proved her acting mettle in films too. She has appeared in Telugu and Kannada films worked in a few Hindi movies as a child artist. 1920 – Horrors Of The Heart: Balika Vadhu Actress Avika Gor To Play The Leading Lady In Vikram Bhatt’s Film.

Avika Gor was seen as young Rajkumari Bhairvi and Bollywood actress Yami Gautam played the role of Rajkumari Bhairvi. This show released in 2008 had become ‘one of Imagine's top ranking programmes in terms of viewership’.

Avika’s character as Anandi shot her to fame. Her character’s journey as a child bride to womanhood grabbed audiences’ attention. It was one of the popular shows aired on Colors TV. Balika Vadhu Actress Avika Gor’s Style Shenanigans Are Edgy and In-Vogue (View Pics).

This was another popular TV serial in which the birthday girl portrayed the character of Roli Dwivedi Bhardwaj. She was lauded for her performance in this show that starred Dipika Kakar, Shoaib Ibrahim in the lead.

Avika appeared as the lead in this TV serial that focuses on ‘sensitive issue of castration’. She portrayed the character Anushka Sangwan Choudhary.

Apart from appearing in daily soaps, Avika also participated in the stunt television series. She was seen a contestant on Rohit Shetty hosted show.

These are some of the popular shows that Avika Gor participated in. Here’s wishing the gorgeous actress a very happy birthday and a wonderful year ahead!

(The above story first appeared on LatestLY on Jun 30, 2022 02:24 PM IST. For more news and updates on politics, world, sports, entertainment and lifestyle, log on to our website latestly.com).