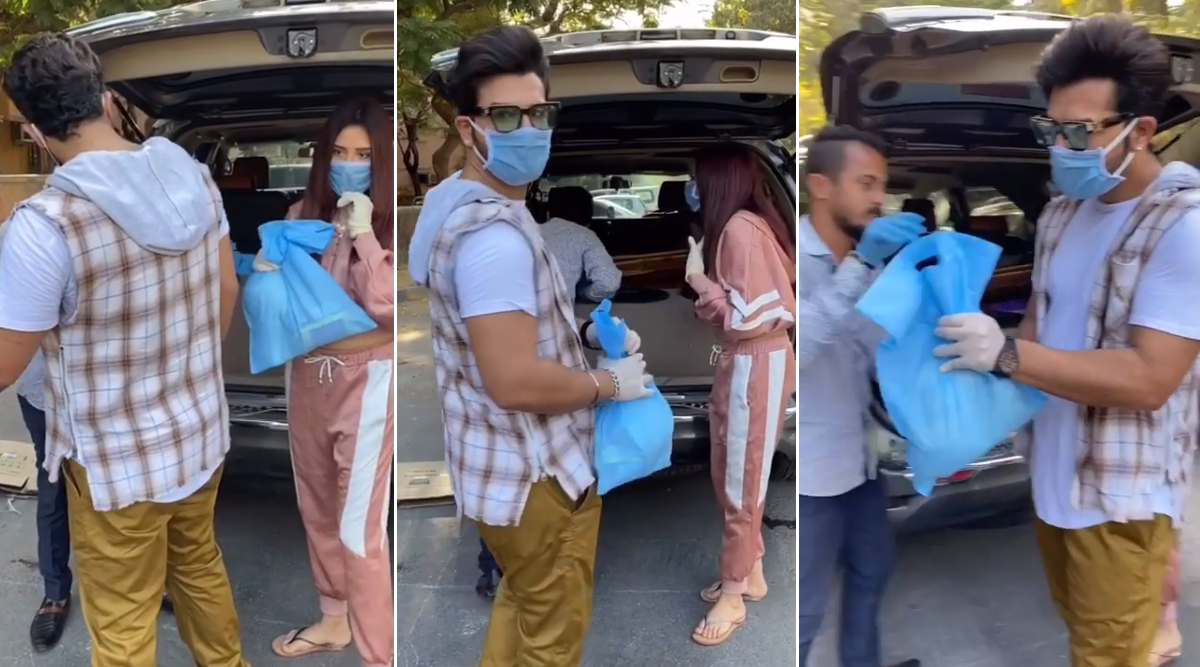 The coronavirus pandemic has united one and all in the fight to curb the spread of the bug. During this hard time, everyone is trying their best to be calm and do their bit. While some are donating to numerous charities whereas a few are supplying daily essentials to one who needs it the most. Now, we've got our hands on a video which sees Bigg Boss 13 contestants, Paras Chhabra and Mahira Sharma adding their efforts to the cause and were clicked distributing essential food items to the needy amid the COVID-19 lockdown. Did You Know That Bigg Boss 13 Fame Paras Chhabra Was a Part of THIS 2014 Bollywood Film?

In the clip, the rumoured couple are seen in the middle of a road giving a bag full of foodstuffs to people standing in the queue. The two can be seen keeping themselves fully protected by wearing masks and gloves while doing the good deed. Paras can be seen in a casual look, on the other hand, Mahira looks pretty in a pink coloured tracksuit. As they say, performing public duty is important and we are glad that these two young lads are doing the same. Bigg Boss 13’s Paras Chhabra and Mahira Sharma to Get Married in the Next 21 Days? (Deets Inside).

We do understand most of you think it is showoff and we respect your views. Even we believe that donation is something we do from our heart and there shouldn’t be any evidence of the same. But honestly it was an genuine effort to motivate people to do their bit in these trying times. We are all in this together guys. We have a shared purpose. That’s all we would want to say right now. Stay positive and stay safe! We will get through this...together! @parasvchhabrra

Imagine if each one us does the same and giveaway a food packet to atleast one underprivileged person, then it'll be so helpful amid the outbreak as such. Meanwhile, Paras and Mahira were recently in the news for signing a Punjabi movie together. While nothing more concrete is out about the flick yet, fans of PaHira are elated to know that the two will be seen again in a single frame after their song, Baarish. Stay tuned!