TV actress Jasmin Bhasin and singer Rahul Vaidya indulged a fight amid a task and the end result saw the former crying and yelling for justice. However, Twitter has a different opinion. Check it out. 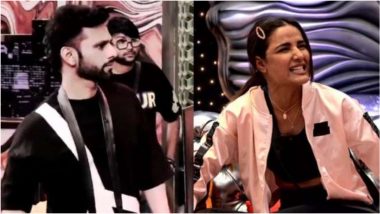 Bigg Boss 14 is slowly and steadily getting interesting. The show which started on quite a blah note is finally seeing a lot of drama, fights, emotional breakdowns, accusations and a lot more. Talking on the same lines, on last night's episode we saw Bigg Boss assigning a new task to the inmates where a fight erupts between Jasmin Bhasin and singer Rahul Vaidya. The task was that each green zone contestant had to guard their travel bags from the red zone inmates until the end to become the next captain. Bigg Boss 14 October 27 Episode: Nikki Has No Feelings For Jaan, Jasmin Has A Meltdown - 5 Highlights of BB 14.

Amid this, we saw Rahul asking Jasmin to leave the travel bag or else he will use force and snatch it. And after several warnings, he finally took to the bag from the TV actress by using his physical strength. After this chaos, Bhasin started yelling and accusing Vaidya of projecting women as weak and physically intimidating her during the task. This incident led the Twitterverse talking and many came out in supoort of Rahul over Jasmin. Check out the tweets below. Bigg Boss 14 Preview: Nikki Tamboli and Jasmin Bhasin Engage in Kushti, Hina Khan and Sidharth Shukla Get Into A Fight (Watch Video).

This is a task and nothing wrong to pull a bag.

More power to you @rahulvaidya23

Rt guys If u feel the same

Jasmine playing women card all the time, Rahul clearly said you’ll get hurt and to leave the bag so if she won’t leave it, of course Rahul will also not let it pass and it’s a game so everything is fair in game. Usme itna kyun nautanki karna? #Stopplayingwomencard #BiggBoss14

In a second she Jaaasmin started crying 😭😭😭😂😂😂

#JasminBhasin is a pseudo feminist, first she falsely slandered #EijazKhan, now #RahulVadiya.. Salman Khan should take a note and stop this girl for playing such derogatory women card in the show.. LOSER #BiggBoss14

Ab confirm ho gaya.. apna pura support #RahulVaidya everyone is bloody targeting him and #BiggBoss has given clear clarification..#JasminBhasin haar bardast nai kar pai.. Shame on you.. from no where gender and physical fight came into scene..

With this, it will be interesting to see who among the two will host Salman Khan support on Weekend Ka Vaar? Having said that, with the entry of new freshers namely Kavita Kaushik, Shardul Pandit and Naina Singh, the dynamics are surely changing. Stay tuned!

(The above story first appeared on LatestLY on Oct 28, 2020 10:18 AM IST. For more news and updates on politics, world, sports, entertainment and lifestyle, log on to our website latestly.com).