Bigg Boss 14 house tonight (Nov 25) saw two best friends against each other. Yes, we are talking about Rubina Dilaik and Jasmin Bhasin. Not just this, captain Kavita Kaushik and Rubina also get into a huge argument when the latter denies to perform her kitchen duties. Check it out. 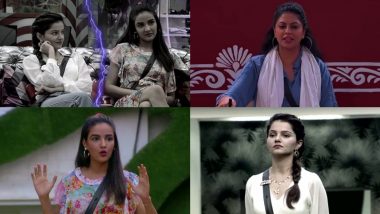 Bigg Boss 14 house tonight (Nov 25) saw two best friends against each other. Yes, we are talking about Rubina Dilaik and Jasmin Bhasin. From day one inside the house, these two popular faces from the TV showed us how to stay glued to one another in good and bad times. But this is Bigg Boss and nothing is permanent. Rubina and Jasmin lock horns in a panchayat task and we see the two finally versus each other. Not just this, captain Kavita Kaushik and Rubina also get into a huge argument when the latter denies performing her kitchen duties. Incase, you want to read more, check out the highlight from the reality show below. Bigg Boss 14 November 24 Episode: Aly Goni Pays a Huge Prize for Getting Violent Towards Captain Kavita Kaushik – 6 Highlights of BB 14.

The day starts with Rubina calling captain Kavita and informing her that she cannot cook. This fumes Kavita and reciprocates by asking Dilaik the reason. The Shakti actress replies that she is not keen to work under her captainship as she feels that its more dictatorship than leadership. Rubina also adds that she is ill. To this, Kavita charges up and makes a sad statement by saying 'jis aurat nein Shakti naam ka show kiya hai vo sabse kamzor aurat hai.'

Abhinav Shukla Flaunts His Bad Side

After Kavita's fight with Rubina, husband Abhinav also denies to the daily chores and creates havoc. He goes to the bedroom and sleeps, removes his mic and also argues with Kaushik when she approaches her to not break the house rules. Finally, Bigg Boss comes to the rescue and asks Abhinav to wear his mic. Uff!

Bigg Boss gives a new task to the inmates where the house gets divided into two teams. Jasmin Bhasin's team includes Nikki Tamboli, Rahul Vaidya, Aly Goni whereas Rubina's team has Pavitra Punia, Eijaz Khan, Abhinav Shukla. The task is such that the two team leads need to try and win as many house hisas they can by going through a panchayat session ruled by sarpanch Kavita Kaushik.

Rubina and Jasmin put their opinions on why the respective self deserves to win the kitchen area. Amid the same, the latter alleges the former of not cooking which led the whole house to suffer. Dilaik in her defence says that she was ill and that is the reason she was unable to cook. However, Kavita proves Rubina wrong and hands over the kitchen area to Jasmin and team.

After the kitchen, the next property is the bedroom and it goes to Rubina and team. It is Kavita who gives this verdict. Well, this decision by the sarpanch annoys Nikki Tamboli and she alleges Kavita for not making the right decision. She also tags her a safe player. Will we see Nikki and Kavita's friendship coming to an end?

That's it, guys! These are the top five important updates from Bigg Boss 14 episode. The panchayat task has not ended yet and will continue tomorrow, let's see what storm it brings ahead. Stay tuned to LatestLY for all the updates from BB 14.

(The above story first appeared on LatestLY on Nov 26, 2020 12:08 AM IST. For more news and updates on politics, world, sports, entertainment and lifestyle, log on to our website latestly.com).