Here's everything that happened in tonight's episode of Bigg Boss 14. 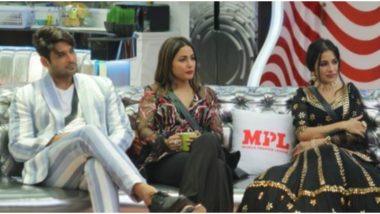 Tonight's episode was rather special for all Bigg Boss fans as we had the first nominations of the new season. There are reports if the seniors have decided Sara Gurpal as the first contestant who will bid adieu to this new season, we'll wait for time to answer that. Nikki Tamboli is meanwhile the new boss, thanks to Hina Khan. The contestant has been chosen by the senior as the name who will get to decide which housemate gets what from the mall. Overall, the episode tonight was high on entertainment quotient and a delight for all BB fans. Shehnaaz Gill is Prepping for Something and We Hope it's for Bigg Boss 14 (View Pics).

First Nominations of the New Season

Bigg Boss had asked the contestants to nominate one name from the lot who they think isn't fit to be in the game. After hearing everybody's names and reasons, Bigg Boss then asks seniors to take the final decision after consulting with each other. Nishant Singh Malkhani, Abhinav Shukla, Rahul Vaidya, Shehzad Deol, Jaan Kumar Sanu, Eijaz Khan and Sara Gurpal get the maximum number of votes and seniors decide to evict Sara.

Nikki Tamboli was seen ironing her ex-boyfriend's boxers. Reason? Simply 'cos she was missing him too much. The South actress later also expressed her desire to wear them (boxers) in the house and this resulted in banter amongst the contestants.

Hina picks Nikki as the name who has the authority to distribute items to her fellow housemates from the mall. Sara, Pavitra, Nishant are given very fewer items by her and the quantity is not enough for them. This same decision creates a rift between her and the contestants.

While there were reports if a love story is brewing between Pavitra and Rahul Vaidya, that definitely wasn't the case. We even saw them arguing in the very next episode. However, turns out Pavitra is smitten by Eijaz Khan and the duo could be the new couple on the block. Bigg Boss 14: Contestant Pavitra Punia's Ex Pratik Sehajpal Opens Up On Their Relationship, Says Their Relationship Has Aggressive and Possessive Phases.

Rubina has a heated argument with Hina Khan. The BB 14 contestant is miffed with the rules laid out by seniors and tries to challenge them while irritating her fellow housemates.

(The above story first appeared on LatestLY on Oct 13, 2020 12:03 AM IST. For more news and updates on politics, world, sports, entertainment and lifestyle, log on to our website latestly.com).