Shanthipriya is the younger sister of actress Bhanupriya, who is also a Kuchipudi dancer. She had made her acting debut in 1987 with the Tamil film, Enga Ooru Pattukaran. 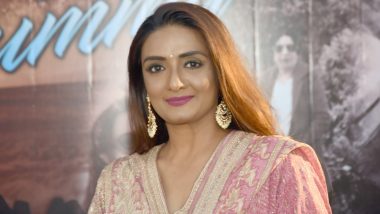 Bigg Boss, the popular reality TV show, is undoubtedly one of the most loved controversial shows. The audience eagerly look forward to watch this show every year. Right now, all eyes are on its new season, Bigg Boss 14. The upcoming season will also be hosted by everyone’s favourite Salman Khan. And now the audience is curious know who all would be participating in this new season. The latest name to do rounds on social media is of actress Shanthipriya. Bigg Boss 14: Here's What Karan Kundrra Has To Say About Participating In the Next Season of Salman Khan's Show.

For the unversed, Shanthipriya is the younger sister of actress Bhanupriya, who is also a Kuchipudi dancer. Shanthipriya had made her acting debut in 1987 with the Tamil film, Enga Ooru Pattukaran. She made her debut in Bollywood opposite Akshay Kumar with the film Saugandh, directed by Raj Sippy. As per a report in Navbharat Times, the actress has expressed her desire to be a part of Salman Khan’s show, Bigg Boss 14. Bigg Boss 14: Shubhangi Atre Aka Angoori From Bhabiji Ghar Par Hain Offered Salman Khan's Show?

Shanthipriya was quoted as saying, “Bigg Boss is one of the most popular reality TV shows and I would definitely like to participate in the show.” The makers are yet to release the list of contestants who would be participating in Bigg Boss 14. Besides Shanthipriya, the other names doing rounds include Shubangi Atre, Chahat Khanna, Zaan Khan, Akanksha Puri and Sahil Khan.

(The above story first appeared on LatestLY on Jun 26, 2020 09:58 AM IST. For more news and updates on politics, world, sports, entertainment and lifestyle, log on to our website latestly.com).