Tonight marks Bigg Boss 14's Weekend Ka Vaar episode and going by the glimpse of it, we feel it's going to be fun. However, the only drawback would be that Salman Khan will not be present for the WKV. From Rakhi-Rubina dancing on a Bollywood number to reporters inside the house, a lot is going to happen. Watch! 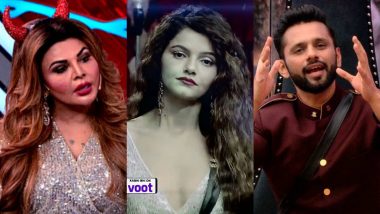 Bigg Boss 14 saw one of the most confusing fights on last night's (Jan 22) episode where everyone was seen yelling at Sonali Phogat for throwing food (paratha) in the dustbin. Having said that, today (Jan 23) marks the Weekend Ka Vaar episode and going by the glimpse of it, we feel it's going to be fun and gripping. However, the only drawback would be that Salman Khan will not be present for the WKV. As per the video, we see drama as well as entertainment. Bigg Boss 14: Jasmin Bhasin To Re-Enter Salman Khan's Reality Show For Aly Goni?

The video starts with Rakhi Sawant and Rubina Diliak dancing on 'Dola Re Dola' song from the film Devdas, and it's a visual treat. We also get to see Nikki Tamboli and Sonali Phogat grooving on 'Ghani Bawri'.  But the drama comes in when we see a group of reporters inside the house quizzing Rahul Vaidya over his constant argument with Rubina Dilaik. One of the journos also tells the singer that the reason he locks horns with Rubina is because he can't take a strong woman standing against him. Bigg Boss 14: Sidharth Shukla’s Shadow Continues Looming Large on Salman Khan’s Reality Show.

That's not it, as Aly Goni and Abhinav Shukla are also all set to fight it out in the boxing ring on tonight's episode. Meanwhile, fans have speculated that Salman has missed WKV for a day, because, he is attending Varun Dhawan and Natasha Dalal's wedding celebrations in Alibaug. Coming back to Bigg Boss, we cannot wait for tonigh. Stay tuned!

(The above story first appeared on LatestLY on Jan 23, 2021 10:10 AM IST. For more news and updates on politics, world, sports, entertainment and lifestyle, log on to our website latestly.com).