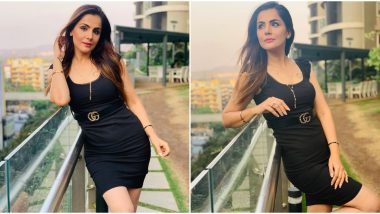 Only yesterday, there were reports of how while a lot of actors were glad to get back to work soon, with the exception of actress Simran Sachdeva, who plays Harleen in Colors' Choti Sarrdaarni. The actress was in the news for getting replaced by Drishtii Garewal in the show over her issues with the show's producers. In an interaction with a portal, Simran had revealed, "There are more than one reasons for the same. Lately, the producers were pressuring me a lot to take around a 40% pay cut which is not feasible for me." Simran Sachdeva Quits Choti Sarrdaarni Over Monetary Issues, Alleges A Producer of Misbehaving With Her (Deets Inside).

She continued, "Also, in the past, I’ve faced many issues with the production house regarding the payments as we weren’t paid on time. One of the producers misbehaved with me and were extremely disrespectful and rude. Now, because of the lockdown and the gap, I had the choice to continue with them or not and hence I decided to give it a pass." Choti Sarrdaarni Actress Mansi Sharma and Husband Yuvraaj Hans Blessed With Baby Boy (View Pic).

However, as per a SpotboyE report, Simran and the producers had a sit down where they spoke and sorted out their differences. And the end result has worked in favour of both the parties, including fans of Choti Sarrdaarni. Simran will be retained in the show and continue to play Harleen. Choti Sarrdaarni Actress Mansi Sharma Expecting Her First Child With Husband Yuvraj Hans (View Post).

Simran revealed to the portal and said, "I had a discussion with the producers and everything is sorted now. So I am not quitting the show anymore and hence there will not be any replacement. And I will only continue to play Harleen on the show". In fact, the portal also got in touch with the producers who confirmed the news and revealed that some 'miscommunication' had taken place but all's in place now. Well, now that's a relief.

(The above story first appeared on LatestLY on Jun 04, 2020 04:19 PM IST. For more news and updates on politics, world, sports, entertainment and lifestyle, log on to our website latestly.com).